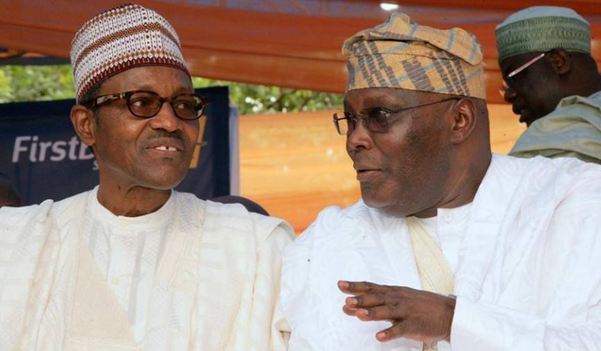 President Muhammed Buhari and his challenger, Abubakar Atiku
Nigerians have seen Muhammed Buhari, a  former military leader, working for four years, as an elected president.
It is time for judgment with the country heading into a presidential election, and the ruling party has given the incumbent president the nod for reelection.
His challenger, Atiku Abubakar, a former vice president for eight years of two terms, under President Olusegun Obasanjo, is not a mean challenger.
Both Buhari and Atiku belong to the country's old school politics. Both know what it takes to win elections, in the absence of the culture of transparency.
Many Nigerians are saying that the ruling party and the government under Buhari have failed the country, but the government's spokesmen and Buhari's public relations men have said that Buhari's government has achieved so much that he is expected to defeat his challenger.
Aside from what government apologists call many strides of the government in the provision of infrastructure, the incumbent's hope for reelection is still much on the fight against corruption, despite criticisms that have attended what many Nigerians call a "highly politicized corruption fight for political gains."
The opposition is reportedly brimming for a takeover from the incumbent, hinging hope on what many Nigerians term a widespread hunger among Nigerians at home, either due to the incumbent's tight rein on the country's purse or lack of astute economic management capability.
The major minus for the incumbent is the rallying together of the old guards in the opposition against the incumbent himself an old guard, due mainly to what the politicians call the incumbent's failed policies. For example, former President Olusegun Obasanjo, Atiku's former boss, who had vowed never to support Atiku for corruption reasons, had at last swallowed his own words and instead endorsed his former vice president of eight years.
Political observers had thought Obasanjo's opposition could be Atiku's Waterloo, but that had changed. The welding together of the former president and his vice-president for the purpose of returning the former vice-president to power against the incumbent does not seem to be a political wisdom capable of advancing the opposition. And the ruling party is seizing the opportunity to go after the opposition and citing the negative relationship between Obasanjo and Atiku and their sudden coming together as ludicrous and laughable.
But observers are saying that if the former president's support for the incumbent four years ago against the ruling party had ensured his own victory while in the opposition, he should not expect anything less than that the former president's support for the opposition this time around against him would be a tough fight. And that it is not a laughing matter.
Many Nigerians are readying to witness the dirty fight on the campaign trail, which some people say will be about accusation of corruption and counter-accusation of corruption. The incumbent who has established a credential for fighting corrupt politicians is himself already being questioned by the opposition about alleged corruption in his administration and that those around him - most of who he relies upon for their support for the reelection battle are themselves corrupt.
One factor is sticking out from Nigeria's democracy. It is the of lack of fairness in the political game. The Lagos State Governor Akinwunmi Ambode, believed to be a champion among the country's governors for uplifting his state in terms of infrastructural development, and a shinning example to other states in the country, has lost the battle for reelection, because of his loss of favor with his political godfather, Bola Tinubu. The reason many people are already saying that the presidential election could go either way and not necessarily to the better side, as the better side is always known to lose election in Nigeria.
If Buhari thinks he is the better candidate, he has to dread the power of those gathering against him. And if those gathering against him think the opposition is the better side, the dread of the power of incumbency and recent outcomes in some state elections in the country must be giving the opposition sleepless nights about the capability of the ruling party to win elections against reckoning.