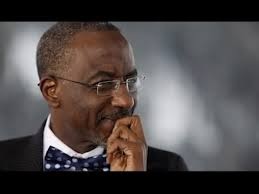 Lamido
Nigeria's Central Bank Governor, Lamido Sanusi, has been suspended by President Goodluck Jonathan, following a recommendation by the Financial Reporting Council of Nigeria. According to reports, the financial reporting council recommended removal and prosecution of Lamido and other deputy governors, after studying the financial management of the apex bank.
Some reports are saying that Nigeria's Central Bank stormy governor has run into a political storm, and has reliably been suspended from office on Thursday.
The suspension, which some newspapers in Nigeria called termination of appointment, is reported to be connected with acts unbecoming the office of a Central Bank's governor, based on information from the president's media office.
Billed to retire from office in June 2014, Lamido has been engrossed on issues with the government over alleged missing oil money that has later been traced another still being traced. But he was said to have passed information about the earlier missing money - but later traced - to  former President Olusegun Obasanjo, and the former president reliably used the information in a letter criticizing  the sitting president's conduct.
Lamido had denied giving information to the former president. He said the former president could have access to the information from the presidency, the Central Bank's personnel and other places where the information was available. The public was unaware of any other investigation against Lamido until the outcome of a shrouded investigation said to have begun in 2013 about how the governor have been running the Central Bank.
According to news reports, Lamido's transgressions include spending billions without approval of the board of the bank and unilaterally acquiring 7 percent share in a Malaysia Islamic bank. Reports said further that when President Goodluck Jonathan got the report about Lamido's rulership of the apex bank, he forwarded it to the appropriate agency without any drama. The report of the agency returned to the president quietly the same way the president had forwarded the matter to the agency.
The agency's report against Lamido had been reported by a section of the media as damning, while others said Lamido was a political scapegoat for outspokenness.
However, some of the liberal public commentators said they are against the way Lamido has been operating the bank like a military dictator. One commentator told the public not to approve the presidency's charge against Lamido, but nonetheless said he condemned how Lamido had been running the apex bank along the acquisition of shares in  Malaysia Islamic Bank. He said he personally sent a note to Lamido expressing disgust. But Lamido got back to him and said that what he had did was not outside the the law.
Lamido has gone to court asking for protection from arrest by the nation's Economic and Financial Crime Commission, EFCC, and the court has granted his request. The governor's forum under the control of opposition governor, Rotimi Amaechi, has called a meeting to discuss Lamido's suspension and removal as Central Bank's governor. In the same manner, all opposition members in the National Assembly are crying foul against presidency's decision on Lamido, despite the fact that the president who has appointed Lamido also has the power to remove him. Others are saying that the FRCN report recommended the suspension and prosecution of the deputy governors of the apex bank and that Lamido should not have been the only the president descended upon.
What is apparent is that Lamido's Central Bank has spent billions of money that belongs to tax payers unaccounted. The court has given him a cover from being questioned if and when the law enforcement agents wants him for questioning. Many Nigerians outside the opposition party are asking whether this is how to combat corruption and if this is the meaning of transparency. They will prefer Lamido and all the deputy governors prosecuted.
Comment Form is loading comments...
NEWS AND FEATURES
News & Features Around The World