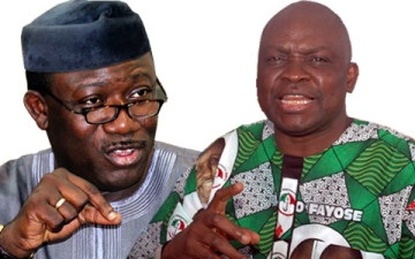 Fayemi and Fayose (Courtesy: Punch)
On Thursday, a chieftain of the National Road Transport Workers, NURTW, Omolafe Aderiye, was murdered in Ado Ekiti, the capital of Ekiti State in Nigeria. Aderiye was a member of the People Democratic Party,PDP, and acolyte of Ayo Fayose, a governor elect on the platform of the PDP in the state waiting to to be sworn into office.
A day before Aderiye was murdered, he was reported to have visited a court premises in the company of Fayose, where he reportedly tore judge's robe and disrupted proceedings in a case filed by the opposing party challenging Fayose's election.
There was no report of any attempt by law enforcement to arrest Aderiye for causing disorderly conduct in a court room. People are asking about who may have masterminded Aderiye's assassination in cold blood. The state was thrown into turmoil with supporters of PDP burning properties belonging to All People Progressive Congress,APC, members. The state governor, Kayode Fayemi, has imposed an indefinite dusk to dawn curfew in the state.
In his broadcast to the state, Kayode Fayemi - the outgoing governor, mentioned the governor elect's visit to the court premises along with the murdered supporter, and almost ascribing the trouble in the state on the governor elect.
But Fayose had told the media that he was not aware of the drama said to have been caused in a court room by his murdered supporter. He accused the APC of the murder of Aderiye during a  condolence visit to Aderiye's family, and challenged the APC members to pay Aderiye's family a condolence visit, if they were sure they did not kill him.
The governor elect had said that the ruling party in the state had a plan to subvert the people's will through a court room, and that Ekiti people were ready not to allow that to happen. He cited past precedences that the ruling party in the state had challenged election results in the court and they had their way, and that there was a plan by the ruling party to subvert his election to pave a way for the party's chairman in the state, Jide Awe, to become governor. Awe was reported as having found impossible to visit his office to see the extent of damage done to it by rampaging members of the opposing party.
Politicians in the state had expressed fear that the era of assassinations witnessed in the past may be on its way back. The new governor elect is due to be sworn into office on October 16. The outgoing governor had appealed to higher authorities to take the sitting of the court looking into the election petition to another state.
Widget is loading comments...
NEWS AND FEATURES
News & Features Around The World