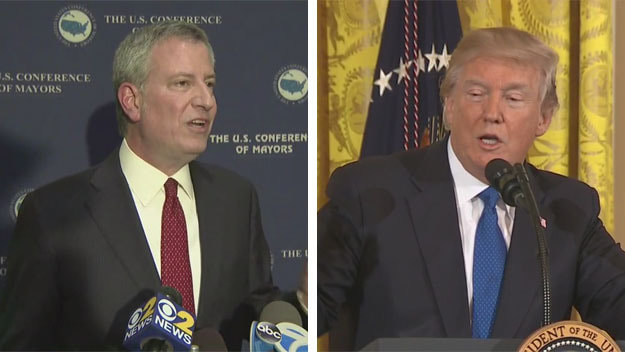 Mayor Bill de Blasio and President Donald Trump
Journalists and politicians have never been friends. The history of the media from the days of the struggle for freedom in the United Kingdom and the United States attests.
Therefore, one is not surprised about the relationship between President Donald Trump and the media on one hand and between Mayor Bill de Blasio on another.
Meaning that just as President Trump is crucifying the media from Washington, the same way De Blasio has been doing from New York.
The case of the feud between the media in other climes,  where journalists suffer incarceration, kidnapping and murder, worse. But that has not stopped the politicians from enlisting the help of the media when they need it, and media practitioners play along with the politicians.
Many people were shocked that major newspapers in the United States agreed in an editorial published the same day against Trump, to show the public that the media is not the public enemy as claimed by Trump. The essence is that the media is saying that Trump is the public enemy.
Was that necessary, in an atmosphere, where many observers no longer trust the media, because of the accusation, that most media practitioners represent the voice of their politician pay masters and the ideological group they belong?
Every day, journalists are killed in Mexico, as if it is their destiny to be so killed. The same killing of journalists take place in many countries around the world, a development that has given the Committee for the Protection of Journalists, CPJ, a herculean job of working to ensure justice in journalists' endless killings and arrests.
As I write, a news reporter in Nigeria arrested for having allegedly culled information from police classified information has been under arrest for reporting information he believed as in the public interest. The CPJ knows that America is a heaven for journalists and not one of the places needing its attention for the inhuman treatment visited on journalists.
Journalists are fighters and Trump is also a fighter. And when fighters of opposite belief collide, there would be a grinding touch like in the case of two irons, when brought against each other. Is it not true that Trump's act is a response of the fight he has found himself as a presidential candidate, when the media's support for an eventual loser?
The media was almost united against Trump's campaign in favor of his opponents. And the media's opposition against Trump continued to the time of his victory in the presidential election. A section of the media that favors the Republican Party and the Conservative causes began to support Trump's administration after the election, when the candidates they favored in the primaries against Trump had all lost.
As things stand now, people are saying that a section of the media needs to show that the fake news name tag that Trump has given it does not hold up, by returning to reporting the news without party or ideological bias. People are also saying it is the only way to show that a section of the media on war against Trump is not the people's enemy, and not by continuing in a war mode. The danger of the current war is to note that tag names Trump has given his adversaries stick to those he has given them. It is why the media must take a proactive step towards showing the public that it does not publish fake news, but that it is professional and reports the news without bias or in favor of any party or ideology.
The solution is not by ganging together to write a uniform  editorial that is itself a sign of selfishness, when the public knows that the media is sick with unethical political and ideological divide, because most observers say the voice of practitioners in the media represent that of their respective proprietors or those who pay the pipers. One is almost ashamed that one is a journalist for this single mole in the profession.
All Trump’s former media adversaries in the Republican Party have realign in his favor. Why is it that journalists in the liberal media remain in antagonism against Trump like the Democratic Party? Are they in the opposition against Trump like the opposition party members? Perhaps, there is a thought of the Robert Mueller's investigation going against Trump to justify their stand against him.
De Blasio has unsuccessfully created a whitewash for what he calls the difference between the CNN and the New York Post. The truth remains that the fact that De Blasio glosses about the New York Post is that the newspaper does unpleasant reporting of the truth against Trump's administration.
What De Blasio has failed to understand is that a war has no two-way definitions; whether you wage it against New York Post or the CNN, it is still a war against the media. And unlike unlike the Trump and the media war, De Blasio has no justification for his war against the media and the reason he tries to pinpoint his war as a war against the New York Post.