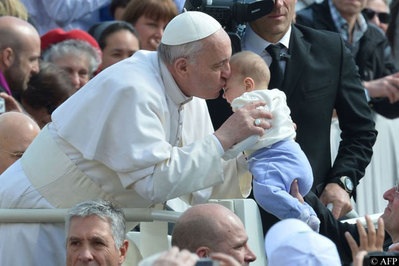 Pope Francis arrived in New York City this evening at about 18:00 hrs, in continuation of his visit to the United States, which began on Wednesday.
As at about few minutes after 18:00 hrs., the pope is in a motorcade on his say to St. Patrick Cathedral in Manhattan, where a mass is already underway, awaiting his arrival.
A large crowd is outside the Church doors awaiting the pope's arrival. Among the people outside the Church are New York State Governor Andrew Cuomo, Mayor Bill de Blasio and Senator Charles Schumer.
Apart from attending a mass at the St. Patrick Cathedral, the pope is billed to visit the Ground Zero accompanied by President  Barack Obama on Friday.
New York City has been extremely busy on Thursday with United Nations Assembly of Head of States and the pope's arrival along with various head of governments arriving the city . Many of the major roads in the city are closed to traffic. For example, 46 Street to 49 Street on Sixth Avenue are affected by the pope's travel from an helicopter pad in Downtown Manhattan to the St. Patrick Cathedral in the heart of the city.
Aside from the pope's presence along with various heads of governments, who are converging in the city for an assembly, there is also a musical gathering targeted toward ending extreme poverty in the world by the Global Citizens Festival on the Saturday.
Of course, it doesn't appear that the pope who would already have been on his way to Philadelphia would have time to attend a musical festival targeted toward extreme poverty. Yes, there is a need to end extreme poverty. Ending poverty or helping the poor is of the Church business. But whether or not extreme poverty will ever end is another issue entirely.
It is poverty or extremity of poverty that will make a man or woman to choose sleeping on the street in winter or summer. It is extreme poverty that will make a man or woman chooses give or her vote to politicians based on a flimsy promise of giving food stamps and cheap housing.
Jesus Christ saw extreme poverty, when thousands of people gathered around him and followed him without food. He was complete to perform a miracle that turned a little fish into food for thousands. It is extreme poverty that will make people drink dirty water, eat food that had expired or not go to school.
In one of my reports last week, I said the pope may not have the time to meet the homeless and the women who dress topless at the Times Square. And the pope may not the time to see the real New York City, since he is on guarded travel, meeting only government of Church officials and only the less privileged who are extreme fortunate.