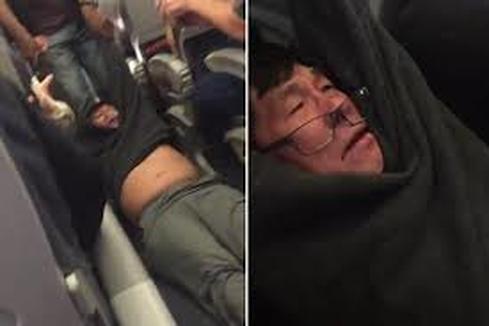 The seen dragged on the floor of the United Airline flight on Tuesday (Courtesy: The Independent)
You see that a man is being dragged on the floor through the aisle of an aircraft on Tuesday in the news. An occurrence on Sunday at Chicago O'Hare Airport.
You think the man on the floor must have been a security threat. But later, information reveals otherwise, and that the man has been unfortunately asked to give up his seat, for the airline's staff.
As you listen to the news on television, the man's picture appears. He is resting on something halfway on his feet, but with blood flowing from his mouth and nose. Yes, blood!
What has he done or what is his crime? Next, a statement comes across your mind asking are we really civilized, treating a man like a criminal,for mere refusal to give up his seat, which he has paid for on an aircraft?
Would any of those security personnel, who have dragged the man on the floor, and flight  attendants, who have ordered that the man be forcibly removed from the aircraft, give up their seat in the aircraft after they have been fully seated and a seat paid for? Why can't the airline get seats for their personnel on another flight, instead of visiting discomfort on an innocent man?
Endless questions without answers. Pray - it has not happen to you and it will never happen to you, because we live in a world, where some humans arrogate to themselves, powers above their entitlements, literally playing God! Do they know the man's schedule, whether he is running to resume work and does not want to arrive late, and thinking that being on the seat and on that flight is the only remedy to save his job and save himself from some other embarrassment that will accompany his arriving late to his destination?
Here is a good example of a traveler, who is running to catch up with time from along distance flight, but unfortunate to find himself marooned in Michigan, because his flight from Michigan to New York has been cancelled due to bad weather in the Big Apple. What is to do? He needs a solution to get out of Michigan and be on on his way to New York, where he is to resume work late that evening after a long vacation.
He decides that if there is no flight, there must be a place to stay to await next day flight, being already late at about 1800 hrs. The airline tells him that he has to pay for his own hotel accommodation, because the airline cannot be responsible for cancellation due to bad weather. He temporarily surrenders to the discomfort, before he begins searching for flights to either New jersey or anywhere near Near York, where he can travel by raod to get to work.
He find luck on a desk by the same airline flying to new Jersey and speaks to the young woman on the desk if he she can help get him a seat on the next flight to Newark. The young woman asks for his name and flight information. She takes them and asks the travelers to find a seat near her desk, for her to be able to reach her, in case anyone who has booked a seat fails to turn up.
He is lucky to have a seat on the flight! After he is fully seated, the thought of the embarrassment he would have faced for not turning up for work after a long vacation assailed him.He hates avoidable absences or arriving late to work. Now, for the airline to suddenly say he has to give up the seat that has guaranteed his escape from Michigan and one that will enable him to avoid absenting from work for no justifiable reason.
Of course, the moment he has been given the seat on the flight, he calls his work that he is on his way. What would happen if the airline decides to take the seat away from him, would he have to call his work back and tell them that he has lost his seat on the flight and cannot make it to work again? Would that not be inconsistent and questionable?
NEWS AND FEATURES
News & Features Around The World