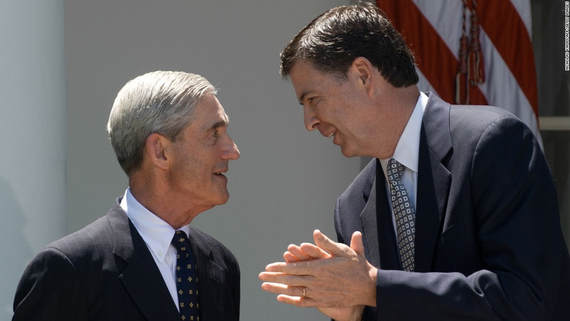 Robert Mueller and James Comey
Political events have been hectic in the United States last few days with Robert Mueller, James Comey. President Donald Trump and Hillary Clinton  in the news.
The Democrats are drumming support for the Robert Mueller's investigation into the allegations about Russian collusion in the 2016 elections.
The Republicans are in support of another investigation in the Congress into James Comey's role in the investigation into Hillary Clinton's use of a private email use and other matters about Russians beyond the elections.
All the investigations are centered on seeming Americans' love for the Russians and Russian connections. Mueller is searching for the possibility about President Donald Trump's campaign organization alleged entanglement with the Russians, and the Republicans are crying about the Hillary Clinton's entanglement to the Russians and uranium business before the elections.
President Trump and his supporters and the Conservative media are saying that there is no collusion between the Trump Campaign Organization and the Russians. The Democrats and the liberal media are saying that the president has become liable for what they say or call Mueller's political equivalent of bombs on the president. What you get depends on the media you are following.
Some people are saying that the court papers filed against President Trump's former lawyer Michael Cohen and the former national security adviser, Michael Flynn by the Mueller investigation contain bombs. Others are saying that the court papers against Cohen and Flynn contain nothing to show there is any bomb against the president of the United States. Yet, others among the Democrats believe that Mueller has redacted so many parts of the Cohen court papers to conceal the truth about what he has against the president.
However, two issues stand out in the papers filed against Cohen. They are about the money paid by Cohen to the women President Trump had contact way back before he became president, and some contacts between men close to the president and the Russians. President Trump has said that Cohen or whoever the New York southern prosecutors have got as a witness in the money paid to the women cannot be saying the truth. But the crowd of Democrats are saying that the president has been netted by the prosecutors.
But some professional prosecutors interviewed by the media have said that no crime has been laid against President Trump in all the statements that are floating and creating frenzies among enemies and supporters of the president. These prosecutors say that Americans are free to have contact and talk to the Russians and even build sky scrappers so long they are not undermining election or Constitution.  Amid the tension, irrespective of the outcome of all these will be for the president and the country, many Democrats are already mapping out strategies on how to prevent the president from reelection!
Meaning that most well placed Democrats are themselves uncertain about the directions of allegations against the president and Mueller's investigation, and they are urging Mueller to be more forthcoming than the public has witnessed. The question about all these for the president is about anyone named 'Michael' as a confidant. Meanwhile, Comey is said yo be avoiding the Congressional subpoena and agreed to a behind the scene questioning. He is reported to returning in a month's time to continue with the questioning.
Comment Box is loading comments...
NEWS AND FEATURES
News & Features Around The World