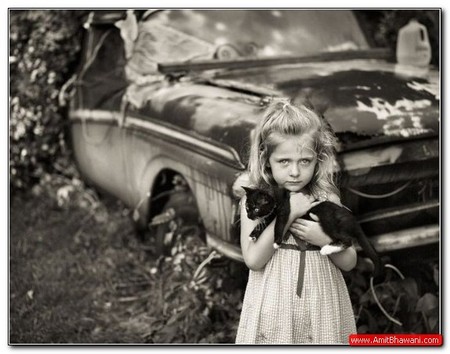 Courtesy: www.amitBhawani.com
A passenger in a subway car is looking around at various posted advertisements. One particular advertisement attracts his attention. In the advertisement, a young girl sits with a finger on his lips asking her mother, “Are there chances that he would not walk away, leaving you alone to take care of me?” Under her words runs a statement about the burden of being a teen parent and a notice that the advertisement has been placed by the human administration section of New York City’s Social Services Department.

The word of the young girl creates a feeling of empathy  and makes one to ask why young men abandon their pregnant friends than remain together to take of the bundle of joy they have both giving life. It evoked in the passenger the reason Tony Morrison said she wrote “The Bluest Eyes”, when she saw a child as a victim and a female. Incidentally, the baby in the advertisement happened to be a girl and that made the passenger to ask self-consciously what could make a man walk away from his bundle of joy, leaving mother and baby as victims.

Traditionally, a child is a bundle of joy. In the past in traditional societies, rarely do young men abandon pregnant friends, and whenever for reason of the need to go to school, the young men’s family will come to the rescue, meaning the young woman has help around her. This thought envelopes the passenger’s mind for days after reading the advertisement in the train, when he comes across a deluge of the continuation of the advertisement during another trip.

It reads, “Got a good job? If you finish high school, get a good job, and get married before having children, you have 98% chance of not being in poverty.” The statement is accompanied with a rider, “Think being a teen parent won’t cost you? Expect to spend more than $10,000.00 a year to raise a child.”

Isn’t it scary to hear that it will cost more than $10,000.00 a year to raise a child in New York? And this question raises another question: What does the city intend to achieve with this advertisement? Reduce teenage pregnancy? Yes, observers say the advertisement will likely discourage teenagers from having children, and it will also drive more young men away from tending to the bundle of joy that may have become a cause of freight.

Poverty is one phenomenon no one wants to associate, not even a city that wants its residents’ rich for mouth watering tax revenue, and it is using the poverty tactics to scare people away from responsibility over the sad issue of teenage pregnancy and its burden, when many residents know that the claim of $10,000 for raising a child in a year is over estimated. Perhaps that may be estimate for millionaires and billionaires. New York is not one of those societies with high rate of unemployment that should have warranted the fear of accepting responsibility for lack of job and income by would be fathers. Teenage boys have no reason to abandon their bundles of joy.

There is a belief that access to birth control pills has not curtailed unwanted pregnancies, because the teenagers are having lots of sex without condom. Many observers believe that there is no need gloating over the fact that the sex culture is such that not even the sales of ‘morning after pills’ to women of all ages will stem the tide of unwanted pregnancy. They say the city is working to discourage the act because it is the one that picks the bill and it has become a way of life the society has accepted as a norm.