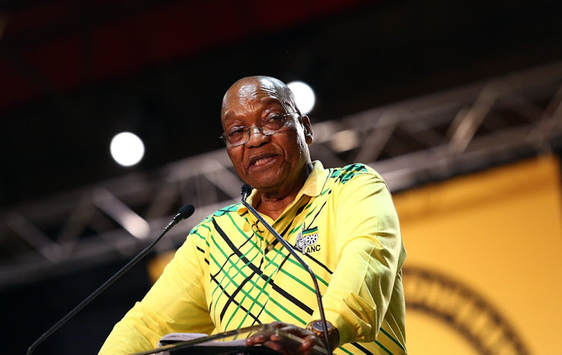 Jacob Zuma speaking at the ANC elective conference in South Africa
It is clear from reports of the South Africa's ANC elective conference in Johannesburg that whoever becomes the party's leader will be the party's flagbearer in the country's 2019 presidential election.
And the fact that the party has the majority votes, its candidate is favored to succeed Jacob Zuma., the outgoing president.
"We are in the majority," President Zuma reportedly said at the conference, as he rallied members of the party to unite against the disunity that reports say now characterises the party. And the type of unity that Zuma is seeking is not clear, as other notable members of the party are telling delegates to vote according to their conscience.
President Zuma has obviously placed his former wife on a route to succeed him as the party's leader and consequently to become the party's presidential candidate, based on long term plans, and relying on the majority of the ANC in the country's politics. But the problem he has unknowingly placed between her and realizing tgheir long term plan is his own inoedinate ambition for material acquisition.
People are saying that it is not that Nkosazana Dlamini Zuma is not qualified to be president, but that the problem is about a wife succeeding her husband in office in a 21st Century tyrannical set up, and that humans are capable of using the majority of their own people to their own advantage and to the disadvantage of the ordinary people.
Just like certain people in the United States asked about what Hillary Clinton was looing for in the White after she had lived there with her husband, Bill Clinton, for eight years of two terms in office, the same question is now being asked by curious observers about what Dlamini Zuma is seeking to do in the government house in South Africa after Zuma's two terms in office. People don't believe that the South African power couple are divorced, and that if they have divorced, it must been a divorce purposed on political program to enable her contest the office.
People believe that despite Bill Clinton's shinning performance as president, Hillary has not find it easy achieving her White House  her dream, becuase the U.S. no political party controls the type of majority that the ANC enjoys in South Africa. Ironically, it is thehis same zuma's term in office that has seen the the unity in the ANC imploded and people are asking members to vote based on their conscience.
What has Zuma done to destroy the unity in the ANC and why? Exhibiting the love of material acquisition and interactions with others for persoanl gains, and using of power of office to protect himself from inquisition and justice. He has therefore made a process which would have been easy for Dlamini Zuma a difficult one, not necessarily becuase of the disunity he has caused in the party, but notably becuase of the stigma not attached to his name 'Zuma'.
One cannot be sure of how bad the stigma to Zuma's name has become among black South Africans, since one don't live in the country. But one can be sure that it is not as bad as the name of 'Judas' among Christ's disciples around the world. How sweet would it have been for Dlamini-Zuma to be just herself 'Dr. Nkosazana Dlamini' without Zuma.
Now, reports from the elective conference say there has been adjornment in the elective process for lack of unity among party members, while efforts are being made by the party's executives to avoid recommendations from Zuma purposefully to help his wife, amid his statements condemneing members of the party who have resorted to the courts seeking justice.
The beauty of the South African colors cannot be denied, watching Zuma adorned in the colors on the internet speaking at the elective conference.  But it is also true that the colors will be more beautiful without Zuma's name in the scheme of affairs considering the odiferousness of affairs during his terms as president, and for what may be termed imposition of tyranny of the majority, if Dr. Nkosazana Dlamini-Zuma becomes his succesor.