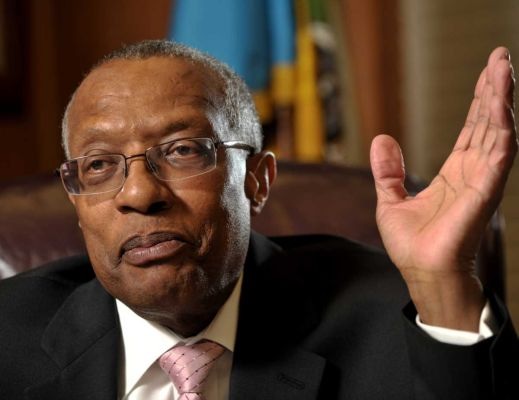 No, what happened was that they don't just happen in one area for long time. It just jumps all over the village. But Terrace Avenue happened to be the area that was open drug market. You can ride down there and see people shooting up, selling drugs, kids were afraid to go to school. You know without getting shy, I asked the DA to help me clean up that area. In the past, the past administration, what they will do, was that before the next election, have a raid on Terrace Avenue, clean up the drug deals, dealers and think they were doing an excellent job. As soon as the election was over, a couple of weeks after the same drug dealers will be out again doing same activities. But this time we went and took over to bust people and those who did not have a felony record were given a second chance. So that program cleaned up Terrace Avenue. Is it perfect? I don't know think so. But is it better better than it was? Yes, much better than it was.

Terrace Avenue is not really an issue. You just have to go over ion places. We have a bar on Main Street that was a magnet of trouble. People get shot over there, people get… you know die from the gun shot wounds. We closed them down. There was another place in Linden Place after… People will go there and get shot There was a mystery of homicide there about five years ago. They could never resolve it and i don't know if we are ever going to be able to do that now. But we were able to close that house down, because the owner of the house was involved in a shooting. So they took him …he got arrested, his brother was arrested for trying to cover up evidence. so since we did those things, a lot of things  like a lot of shooting and people getting shot is way, way quiet. It has been quiet since we terminated those two businesses here in Hempstead.

No. Because all over the state, as I said, some crime have moved up and some have moved down. But when you tally all together, it comes to be a lower percentage than all. Each year the crime may have gone down. Even though, some crime have been going up. So the reality is that overall crime now that we have in this recession has started to decline and that seems to be the trend all the Long Island. But certain crime have been up.

People outside Long Island express fears in online discussion about allowing there children to enroll in Hofstra University, a good college located in bad environment. What is your reaction?


I will think that if you look at all the colleges, they seem to be in urban type of areas. Columbia University is in Harlem. There was a crime rate somewhere in Harlem, they did not move out. I just think that anywhere we go, there is crime. I mean for example, what happened in Connecticut that is well area. People got killed there. 26 people got killed there. What I am saying is that crime do happen anywhere and only in Hempstead. Here we do get a little more. They seem to be sprees and then what happens to catch these guys? There was robbery there in Uniondale.  on Hempstead border. The cops caught them. Since the cops said they captured these people there has been nothing over there across the university. I will always suggest to students when they come out to be conscious of what is going on, don't travel alone… be with a friend. But the thing is that 'crime is a crime.' It just happens anywhere and any place.


Number of people in Hempstead to number of police officers.

I will think that they have more police to take on the on the crime rate. We have authorized the next year's budget to add five more police officers to get up the compliment to about 126 or 127. So I think with modern technology, plus the police, it is the only way we going to fight crime. Last year our charts. Charts detected that the hits the police that the police will be there within a minute  and that itself may save somebody's life. But it also suppose to have a deterrent in crime. We have to evaluate that since we have it for one year now, whether or not the crime rate has fallen down. The real test is going to be tis year  as opposed to last year. It is when we can compare this year to last year. We installed the shot buster in January last year. How many shots we got last year… 500. So we going to compare all that to how many shots we got this year … may be 200. And that we mean the shots buster has some effect on it plus with the police work. I just believe that cops will help deter crime.

As you know, when young men get in trouble they go to jail they come out they can't get a job. Simple as that. They got to racket. No one is going to give you  a job depending on the severity of the crime. You can forget it if you have a homicide. i think you are not going to get a job anywhere. You get things against you. At times they don't have an education. You... and you don't have any type of skill, you cannot read or whatever. It is hard for them to go to jail and come out and get a job. Though we recognize that so we are going to embark on ….millions project that is going to create 1000 temporary jobs. The thing that makes this project unique is that we all have 25 percent of the people from Hempstead and they have to do the same with the contractors. What makes this unique is that we have a job slated for persons who don't have job, want to learn skill and the majority of this people have come out of jail. I am always keeping with my philosophy of giving people a second chance. 'So all these young men that have rackets,' we will tell the contractors,'but now he is cool,he is straight, can you give him a chance,' and they have been doing it. We have been putting ex-offenders as you know, giving them work to do.

Do these ex-offenders connection with a Hofstra student killed in her house last year?

You know what it is… crime can be committed anywhere if you gave the person an opportunity he is going to commit a crime.If he already a bad guy, if he sees an opportunity, he is going to commit a crime. And by the way the crime that you speaking of did not happen in Hempstead, it happened in Uniondale. But if you gave a person an opportunity who is already a crook or a bad guy, then you leaving the door wide open for a problem. A lot of people see the open they think you ran out of the house. You either close the door, or they going to rob you.