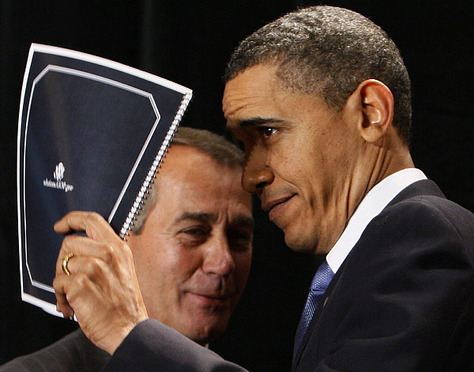 Boehner and Obama (voices.washingtonpost.com)
The blame game has started over the government shutdown in Washington DC, United States, with effects all over federal government business around the country.  The blame pushing actually began before the shutdown on Tuesday night.
The Democratic leaning side of the mainstream media wants John Boehner and his Republican Party hardliners held responsible for the shutdown, while the Republican leaning media are accusing the Democratic Party members for pushing a healthcare law they say the people don' t want.
Many people are saying that It is the president’s office ability to lead that is at stake here. They say the office of the president needs to address the issues raised about the new law, accept amendments in the areas it knows that the public agrees with the Republican Party, because the Republican Party’s argument is gaining traction.
Many members of the public say they have not been fully enlightened about the provisions of the new health law. Many express fears about what they say they are hearing about the law. People are still asking why anyone should be penalized for opting out of a program.
In this scenario, President Harry Truman came alive, a reminder to observers about what he said and popularized "The Buck Stops Here,” a reference to Truman's acts of accepting responsibilities on issues during his presidency.
“The Buck Stops Here,” as an analogy, according to Wikipedia first arose following the tendency by nation states to refuse to confront a growing threat in the hopes that another state will. It means readiness to accept responsibility on grievous issues.
Many leaders around the world have used the phrase to advantage in tough situations. But in the current spending bill and Obamacare crisis that has culminated into government shutdown, nowhere can one see anyone accepting responsibility.
President Barack Obama and members of the Democratic Party controlled Senate are saying that the Republican Party’s hardliners have caused the government shutdown. Conversely, the Republican Party controlled House of Representatives says the president and the Democratic Party’s controlled senate have caused the shutdown.
Global Pentorch spoke with many people in New York City, the outcome is that the public says buck passing is unwelcome. They say that President Obama’s White House owns the Obamacare, and that not just members of the Republican Party have disagreed with some parts of the law. They see the Democratic Party’s insistence on having the law as it is currently written forced down the throat of the people as undemocratic.
The public says why whatever changes required in the law have remained without discussion between the Senate and the House up to the moment of their disagreement should be the responsibility of the president and his staff; they are said to be the architect of the law, but have failed to win over or convince the opposing side to the benefit of the new law.
People say Boehner is not the president of the United States, but Speaker of the House. President Obama, they say, is the leader, and added that in a democratic setting the president's office should not have expected that the law it has packaged, no matter how well intentioned will escape public scrutiny. It should not be about holding a particular party or any individual responsible, because every association and individuals have the rights to question whatever they perceive as being against the public interest.
Whether they are doing this for political reasons or to show hate for the president and the office is a matter of opinion that anyone is free to hold.
This is happening on the president's watch and it is him that Americans will ask about what has happened. It is why they say uneasy lies the head that wears the crown. if the crisis leads to the what Lloyd Blanfein of Goldman Sachs calls dimension that he has never witnessed before now and will not like to witness, it will be recorded as part of Obama's presidency, and not Boehner.
Some observers say that the event in Washington is the intention of the founding fathers. They say that various textbooks on American politics assert that the founding fathers deliberately created checks and balances between the Executive, the Congress and the Judiciary. What is complicating issues for Obama, they point out, is that he formerly had control of the Congress, but that he lost the House of Representatives in ensuing elections. But he still has the Senate. The Senate is supporting his agenda, but the House of Representative is checking his agenda to create the required balance, rather than allow the Congress to become executives's rubber stamp.
Widget is loading comments...
NEWS AND FEATURES
News & Features Around The World