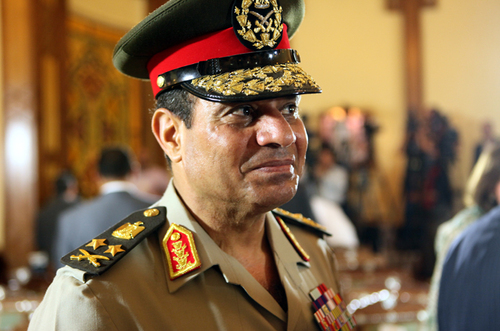 General el-Sisi
"I will boycott because my vote doesn't matter" Rawan Ahmed, 23 told the BBC. What Ahmed says she would boycott, because her vote does not matter is the charade of a referendum in Egypt organized by the military henchmen to gather approval for its removal of President Mohammed Morsi and pave the way for President el-Sisi.
General Sisi has been reported as having said that if the people approves the removal of the former president in the ongoing referendum, it will mean a nod for him to be a candidate in the forthcoming presidential election. General Sisi to contest the presidential election as a candidate? Has the hide and seek game come to en end?
The top army general is seen bespectacled, accompanied by a motley number of security personnel on a visit to a polling station, as he goes round to personally see how the referendum is progressing.
Coming soon after the overthrow of Morsi in a coup that the general and his acolytes at home and abroad have said it is not a coup, but an attempt to take the country back from a wrong direction, will the general's friend and the world now see that Morsi's removal is indeed a coup undertaken in stages to foist General Sisi on the country as an elected president?
Would General Sisi's friends dissuade him from presenting himself as a presidential candidate, for the so called coming presidential election to earn credibility? This is a question that many observers are quietly asking. In their mind, they are saying they have witnessed this type of development in many countries before Egypt's turn. They say its about a struggle for power and access to the country's resources. They say it is mostly the handiwork of the elite using the people as fodder to achieve their aim.
People who are knowledgeable about military coups and military officers' often hidden political ambition say there is always a script and the coup makers will follow the script until it is no longer possible to have their way. They say it is what many people who have described General Sisi as having no political ambition and highly disciplined don't understand. But now that the guy has mentioned possibility of presenting himself as a candidate for the presidential election, they would realize he has a script and he is working toward achieving an objective.
Obviously, Egypt is still in crisis. Members of the the Muslim Brotherhood have boycotted the Sisi's referendum. Ordinary Egyptians like Rawan Ahmed also have chosen to stay away knowing the direction that the country's political program under General Sisi is heading. But who will stop General Sisi? He has control of the power of coercion. It is not even the United States withdrawal of part of its assistance to the country's military has discouraged the general from pursuing his script. He has gone all the way with an aim to kill the Muslim Brotherhood by designating it as terrorists organization.