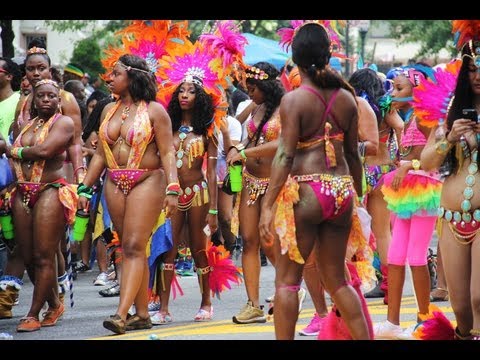 A photo of women in their various costumes on marching toward Crown Height in Brooklyn (Courtesy: loopt.in)
Large number of costume attired people of West Indian origin, converge in the Crown Height area of Brooklyn on Monday for Labor Day celebration. It is the Labor Day holiday in the United States. It is once a year event that attracts quite a large number of merry makers, which the gathering by people from the Caribbean countries in Brooklyn, forms a major part.
It is the one day of the year that witnesses fully packed trains, really fully packed trains, from the three boroughs of New York City, and the Path Train from New Jersey, with majority of workers out of work, traveling toward different venues of celebrations, to unwind and enjoy themselves, dancing or watching people dancing and gyrating to different types of music.
Many people say the celebration often starts the night before the Labor Day. Therefore, they say it is not unusual to witness many people in their free wheeling attitude, having bottles of liquor to show for their state and what may have transpired before their outing on Monday morning, when sane people hear all sorts of obscene languages and see manners out of the ordinary. Many workers believe it is their day and that they have the freedom to do what they have missed working round the clock.
For the new immigrants, the labor day and its celebration is a novelty. Dressed in different type of costumes representing each of their countries in the Caribbean Island, they line the streets in trucks with music blaring atop open trucks, men and women dancing with joy, for being alive and surviving another year of labor and managing their affairs that include paying unending rent or mortgage and bills, which have become part of their lives as immigrants.
The first day I witnessed the episode on Brooklyn Streets 15 years ago, it was great experience for me. Before the day, a manager at a Pharmacy, where I worked at that time had told me that I would see women in their bikinis that I had never seen before and that I should be ready to catch a glimpse of beautiful ladies in demonstration on the streets.
However, it turns out that the experience becomes one that shows that the Labor day and The West Indian Parade have their ugly sides, just as they have the beauty of watching workers celebrating their day. While I stood guard at the door of a retail store, where I was posted as a security guard on essential service, I saw bad guys who entered the store with knives to shoplift. I know that the knives are as dangerous as the guns and to be alive to tell the story after the experience requires smartness. So, I ran and dodged in the store workers' break room as as soon as I saw the bad guys gained entry.
With the break room's door secured, I called the police. But before the arrival of the police, the bad guys had got whatever they wanted from the store and ran out. The police took the report of the incidence aas witnessed by a female assistant store manager, who was on duty. The following day, the store manager, who was off duty on Labor day queried my decision to call the police. without the approval of the assistant store manager.
I told the manager that my life was more important than whatever the merchandize that the bad guys may have made away with them and that to have waited to call the assistant manager's attention before calling the police was to knowingly put my life in avoidable danger. He then said that the store would have to pay the government for my calling the police and I said no matter how much the store would pay could not equal my life and the need for me to be alive to take care of my family.
Today, living in East Rutherford, a borough in New jersey, where the importance of the family comes first in the order of affairs and followed by progress, I realize the importance of being an immigrant with a family and the need for progress and that to achieve these objectives, one has to be alive and not gone with people who are unfortunate victims of senseless killings on labor day and around the West Indian Parade ground.
Hardly a year of celebration without one or two people or more losing their lives. It is one reason many people who distance the parade ground in Brooklyn proffer for their avoiding the show. It is my wish that this year's parade will be free of stories about senseless killings. What is in the news does not seem to approve my wish. It is a story about hell in heaven as guns have been reported night before Monday morning with casualties..
NEWS AND FEATURES
News & Features Around The World