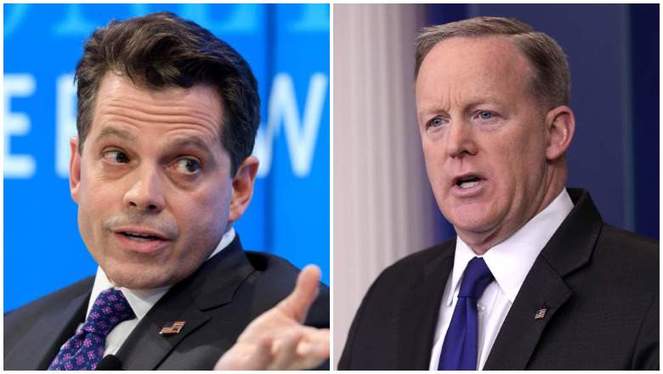 Anthony Scaramucci and Sean Spicer
The sudden departure of Anthony Scaramucci from the White House as director of communications shows that the unsettling situation in the world's number one democracy is yet to be over.
The problem of high turn over in the number of staffers, who have exited the White from Trump's presidency shows that the hard campaign fight in the Republican Party may not have been over and may have been haunting the  administration.
With mostly Republican Party affiliated personnel exiting the administration, what sense of belonging will exist between the administration and the party?
Sean Spicer was first to exit as press secretary. He was followed by the chief of staff, Reince Priebus. And as soon as Scaramucci entered, another senior officer, said to have been close to presbus at the party's secretariat, resigned. It must be noted that all who have left are victims of leaks, which no one seems to have an answer as to who may have been leakers within.
The only exception is Scaramucci - whose reason for leaving must have been for being an outsider, found to be confronting virtually everyone within as imaginary enemies responsible for the leaks. However, the exit of mostly Republican Party big shots, who came in with Trump showing unity between the party and the new leader must be a cause of concern for the party and the party and the administration insiders.
Undoubtedly, the new press secretary, Sarah Sanders, also has party affiliation background, tracing her as daughter of Governor Mike Huckabee of Arkansas. There may be others like her in the White House, appointed to office as a result of party affiliation, aside from their academic and professional qualifications. Existence of such party affiliated officers will give a picture that the party and the administration are still one politically.
Reports say that Trump's decision to let Scaramucci go was based on respect for the advise of the new chief of staff, General John Kelly, whom observers say is best placed to help the president do the clean up required to make the White House stop the leaks. But letting Scaramucci go is already taken to be a sign of trouble for the administration among media gurus, especially those whose goal is to tar the administration as confused and lacking direction.
Of course, Trump is known to be expert in letting go and hiring new hands to help push his agenda as shown during the campaign, with three managers succeeding each other as the campaign fight deepened. One lesson is clear in this development and it is that Trump will overcome this initial experience in government, just as did his campaign in a fight that observers thought was a lose, lose game.
Scaramucci's exit also shows that no officer in the white house can be sure of forever not losing his or post, becuase like it or not, Trump can decide to make changes at anytime as long as it will help push agenda forward, careless of who is affected. This is given the high publicity that followed Scaramucci's appointment and the camaraderie that seemed to have existed between him and the president's loyalists.