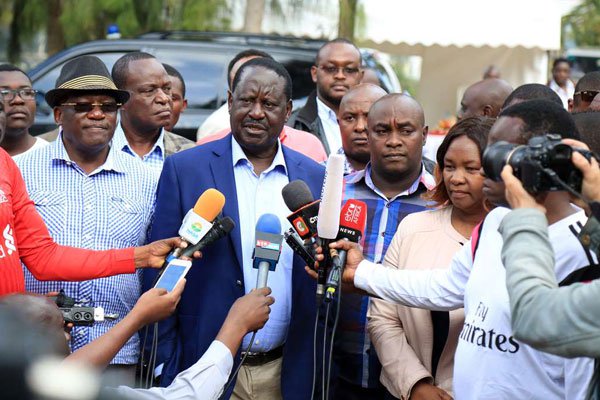 Raila Odinga fielding question from reporters after a meeting on Saturday in Kenya. (Courtesy:Daily Nation)
Will political developement in Kenya go the way of the recent political events in Zimbabwe? It is too early to know.
Just few weeks ago, attention was called on this to developements in Zimbabwe and that the country's political turn of events were reporters' delight.
Soon, events in the country snowballed into inferno like situation that later led to the end of the world's oldest president in office.
Events in Kenya is almost taking the same dimension like the world witnessed in Zimbabwe. Although, Emmerson Mnangagwa banished himself to be alive to fight again, Raila Odinga by opting out of the presidential election was a form of banishment, like knowing that the powers in the country were ready to do all it needed to maintain power, and anyone who stood on the power's path could become a victim.
Fighting from outside and not a candidate in the lection, Odinga decidedly took a new title of the country's resistance leader, setting up agenda to delegitimize Uhuru Kenyatta's re-election victory. Now, Odinga has said his swearing on December 12 will be based on his victory in the august 8 election, which according to him deliberate falsification of election results by the incumbent and the electoral commision denied him.
Consequent Odinga's resolve against agreeing to work Kenyatta without the government and the police apologizing for the killing innocent Kenyans and at the same tiem address the electoral malpractices, the country may be set for a showdown between the unpopularly elected second term president and the opposition leader.
Although, pressure is said to mounting to stop Odinga from the December 12 planned swearing in ceremony in Kisumu, reports also shows that Kenyatta's party is also calling Odinga's bluff, while the United States' representative is busy holding meetings and talking on the phones to cool tempers.
Apparently, it is impossible to have two president's in one country.  Kenyatta is the officially elected president known to Kenyans and the world. But observers feel that the political confirguration in Kenya and the cause of the mass killings in the 2003 political impasse is such that is capable to allow two lords to emerge, each in control of his area of the country.
The Kenyatta government and the police are said to be working to undo all the plans that Odinga may have for a swearing on December 12. The U.S. knows the implication of the development in the East African country and doing everything possible to avert a political disaster there. Observers are saying that the U.S. may succeed at stopping Odinga's swearing plan, but stopping Odinga's plan for the inauguration of the people's assembly will be one difficult assignment on the U.S's table.
Therefore, it is certain the opposition will gather in Kisumu on December 12. And the Kenyatta's government wiil not want the gathering to hold, to avoid the unexpected from the opposition. Though, the opposition may give its words that there will be no swearing in, (It has not as at the time of writing this), but only inauguration of the people's assembly. So, Kenya is set for a show requiring the world's attention.