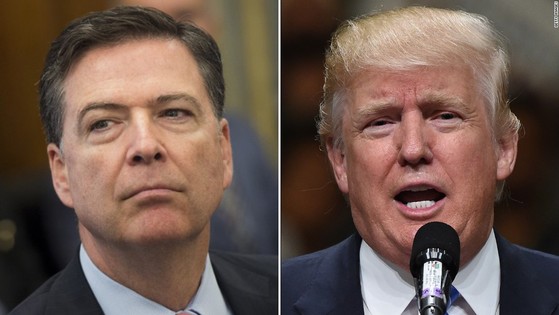 James Comey, former director of the FBI, and President Donald Trump
President Donald Trump Is not under investigation, the former FBI director, James Comey, said on Thursday, in his testimony to the Senate Judiciary committee.
The former FBI director said further that it is not his responsibility to say or not whether President has obstructed justice.
Testifying before the Senate Judiciary committee, Comey said that President Trump's statement to Comey to let General Flynn go only concerns investigations into General Flynn's meeting with a Russian ambassador and that it has no barring on the investigations into alleged Russians' collusion in the United States election.
However, Comey came into the senate chambers on Thursday brimming with fire in his opening statement, ready to clear his name as a responsible officer of the FBI during his time as head of the organization. He also said that the FBI as an organization is doing great work, and and that his colleagues in the organization are best anyone can work with and that reasons advanced by the White House for his dismissal are lies and attempt to tar him and the FBI, as part of effort to to circumvent investigations into the Russian collusion and the reason for his dismissal.
But when asked if there has been any evidence of Russian collusion in the elections, Comey said that no evidence has been found. When asked again whether the Russians tampered with votes in the last election, he said no that there has been no evidence of Russians tampering with votes.
It did not appear from Comey's testimony that he came to the testimony to destroy of dig President trump into trouble, but it was clear from his opening testimony that he was sad over his dismissal and the reasons that the White House gave for the president's decision to remove him from office. All in all, Comey said the decision about whether President Trump tried to obstruct justice is for the office of the Special Prosecutor Robert Mueller to decide.   The Flynn investigation and President Trump's statement to Comey "I hope you let this go.He is a good guy" came into play, when one one of the senators asked if Comey - as a prosecutor has ever seen or witness anyone convicted using the word words "I hope" and comey answered that he has not seems to have punctured the canon that Trump's enemies have relied upon as the bombshell. Experienced prosecutors have argued before the Thursday's testimony that if the special prosecutor who has interviewed Comey before the testimony see a silver lining to warrant obstruction of justice charge, he would not have advised or allowed to Comey to attend a public testimony.
In a response, some statements credited to President Trump by Comey, during the meeting between  President Trump and Comey as the head of the FBI, President Trump's outside Counsel said that Comey's testimony was vindication of President Trump that the president was not under investigation and that the president has done nothing to obstruct investigations into the alleged Russians' collusion in the election.
One major issue in Comey's testimony that had sent mouths wagging was his disclosure that he gave a memo from his meeting with President Trump to a friend at Columbia University to help him release it to the media, and his description of development about how President Trump's tweet over a news report about the leak subsequently led the Justice Department for the of a a special counsel.
The liberal media concentrates its reports on Comey's opening statement and his declaration that the reasons  offered by the White House for his sack were lies. While the Conservative media concentrates its reports on the areas of Comey's testimony that exonerate from wrongdoing.
Many of Trump's supporters said that the cloud that President Trump sought to be lifted over his administration to allow him concentrate on managing the nation's affairs, and the reason they said he had meetings with Comey to ask whether or not he was under investigation, had eventually been cleared at Thursday's testimony.
​