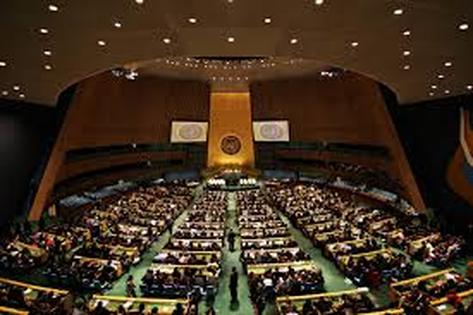 The world body is called the United Nations. But in reality, the body really unites on issues. Even, when they seem to unite, there is the power play among countries that the form the security council that always disunite the body.
When the allied countries agree on an issue, there are always Russia and China, throwing firewood or pouring flammable gas, exacerbating any issue the world wants extinguished. But there re occasions that Russia and China have failed stopping what constitute destruction of countries that have defied the allies.
In the just concluded meetings at the UN General Assembly in New York, Federica Mogherini, the European Union's foreign minister, in a reaction to President Donald Trump's speech on North Korea said: "We never talk about destroying nations." It was her reaction to Trump's statement about destruction that awaits North Korea, if the country's leader, Kim Jong un, fails to backtrack from his suicide mission.
The world already knows the love Jong un has for collecting missiles and plans to attack America's mainland. Mogherini has not said that no country has been destroyed before, but only said that they don't talk about destroying countries. Some other leaders like Robert Mugabe of Zimbabwe share Mogherini's assertion.
These leaders seem to have forgotten developments in Libya and Iraq. It may be true that the UN countries don't discuss destruction of countries, but they do destroy countries, like they have done in Libya and Iraq. Russia and China were opposed to the destruction in Libya and Iraq, but they could not stop it.
And so when Mogherini's statement appears in the media, it acts a s a quick reminder to events in :Libya and Iraq. What happened in Iraq? What happened in Libya? Were the allies engagement not led to equivalent destruction of those countries? Weren't events in Iraq and Libya not consequence of weird diplomacy?
The world definitely misses the flamboyancy of both Muamar Gaddaffi and Saddam Hussein. Jong un is one leader who seems to share Gaddaffi's past time of surrounding himself with female guards. But unlike Gaddaffi who was popular here with his tent, Jong un is a total pariah, who does not attend the UN's meetings.
People seem to believe Jong un's statements and boastfulness that he is indeed amassing dangerous missiles capable of humbling America. Instead of telling him to take his country out of the path of destruction, which he has placed it and the truth uttered by Trump, some of us are talking equivalent of the UN's weird diplomacy, that the UN does not discuss destruction of countries.
​   Failing to acknowledge the fact that some countries, including Syria, have been destroyed,  consequent of weird diplomacy and that Jong un has placed his country on the same path.
Widget is loading comments...
NEWS AND FEATURES
News & Features Around The World