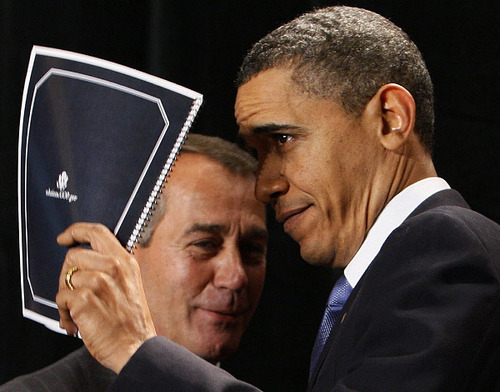 Boehner and Obama (Courtesy:voices.washingtonpost.com)
Federal Government in the United States faces shut down if the warring parties in the Congress cannot get the acts together by midnight. But as the shutdown looms, many Americans don't seem to be concerned by the effect the development will have on the country.
Newspapers have been reporting about the likely negative effect government shutdown will have on the country. They say government will be unable to honor its pledges, pay workers' salaries and the country's credit rating will be affected and consequently the country will be unable to borrow.
However, the one are where the effect of a shutdown would have been dismal is being taken care by a different bill from the House of Representatives that will ensure the country's obligation to the armed forces is not affected. It is the provision of this bill that has given the curious public a head up that the Republican members of the House are ready for whatever it will take to address changes they have asked for in Obamacare.
As the showdown between the House of Representatives controlled by the Republicans and the Senate controlled by the Democrats show, if the Senate refuses to go with the latest bill as amended by the House or if it passes the Senate and President Barack Obama vetoes it as he has promised, the shutdown will be imminent on Tuesday midnight.
People interviewed by Global Pentorch don't seem to bother about the likely consequences of a  shutdown.  Castellan works in Manhattan, New York. He was asked whether he was bothered about the impending government shutdown. He said, "Hun, it is about Obama  again. These people don't just want to support anything he does."
A New York State Police Officer who was interviewed at the Stephen Siller's at this year's annual  memorial ceremony at Battery Park in Manhattan  said it does not bother him, because he will be paid anyway. "If you will be paid, why should bother you. I am sure you will be paid and that is it."
Someone says this is how it goes, "If you work for the Federal Government or a contractor, expect it to impact you. But if you work for a private employer who does not have contract with the government, you have no problem."
Even companies that do business with government will have to take measures for survival and how they will meet their obligations to their employees in the few days or weeks the shutdown may last.
Welcome to Washington, where law makers disagree to agree, as part or the most important  part of their assignment.