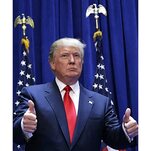 President Donald Trump
Politicians play to win elections and not following their convictions notwithstanding whether it leads to winning or losing an election. Many people think  that as part of politics it is either the ploy or the fear of losing an election that has made President Donald Trump to mouth calling the military and still distancing himself from calling out the military to maintain law and order, when it is obvious that looters and other criminals aiming at discrediting the government has taken over the protest of George Floyd's death.
Look at how looters and destroyers are destroying statues including the ones of the founding fathers hiding behind accusation of systemic slavery.
News reports and arguments in favor and against calling of the military has shown that Trump has the power to call the military to arrest this disorderliness and to damn the consequence.
What would become America's history when George Washington statue is set on fire when Thomas Jefferson's statue is set ablaze and when the flags are torn on the street of America and set ablaze? What we have been witnessing in the last few weeks is nothing short of insurrection.
You expect your president to be decisive against breakdown of law and order, like George Washington did against the Shay's rebellion with an instruction that if their demand is genuine, give them what they want and if it is opposite deal with them.
Trump's difficult position is understandable that he does not want to play into the hands of his political opponents, knowing fully well the opponents seek ways to weaponize every development against him.
And despite sitting on the defense, the president's opponents have driven a wedge between him and reelection. Americans are now faced with the same situation they find themselves in 2016 faced with two candidates that were unfavorable.
Here is an incumbent president that the liberals hate like shit and have tried to remove from office at all cost running for reelection, and a liberal candidate whose conspiracy with his son in corrupt acts in Ukraine is not secret. This is no longer a democracy but a demoncracy.
And Speaker Nancy Pelosi is reportedly also removing statues of former speakers said to be or considered confederate, further encouraging the disorderliness in the country. Shame!
Comment Form is loading comments...
NEWS AND FEATURES
News & Features Around The World