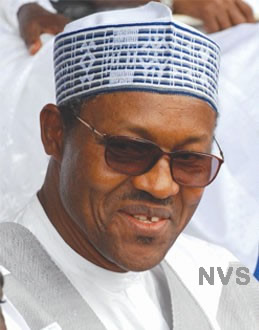 Buhari
Muhammed Buhari is Nigeria's new president and commander-in-chief of the armed forces. He was sworn into office on Friday in Abuja, Nigeria. He succeeded Goodluck Jonathan, whom he defeated in a presidential election held on March 28, 2015.
It is the second time Buhari has emerged as a leader of the world's most populous black nation, having been a former military head of state in 1983. Many Nigerians, as well as other observers around the world, look up to the former military leader to pilot the country from the abyss to the top again.
But the new president has said he cannot perform magic, which he says expectations of Nigerians of him as democratically elected president represents. He had made it clear that the country had been stolen dry in the 16 years of democratic governance by the People Democratic Party, PDP, the country's former ruling party.
Nigerians are welcoming Buhari as Messiah, but the man is saying he is not Messiah, because the work at hand is daunting.
When Buhari ruled the country 32 years ago as a military head of state, he was 40 years old. Now, at 72, observers say there is little Buhari can do to correct anomalies in the system, unless Nigerians themselves are ready for change, and this they say will depend on the legislators who are the peoples' representatives.
But Nigerian legislators don't hold that hope because in the last 16 years of democracy, they have been fending for themselves while the interest of the electorate has been sidelined. A former president who was not known to be worthy a million when he assumed office 16 years ago had suddenly turned into near billionaire after departure from office.
Sadly, the same former president is the loudest among people who have been calling for the eradication of corruption. No one in Nigeria will agree that he or she is corrupt, but that every other person is corrupt. However, it has suddenly damned on majority of Nigerians that corruption is responsible for the country's parlous state of affairs.
Many Nigerians and observers around the world believe that It is clear that corruption among government and business leaders has impede development in the country and that Nigerians who are struggling for survival are the worst for it.
Curious observer noted that Buhari said the country's treasury had been emptied in the last sixteen years of democracy as if he had forgotten that his emergence in 1983 was to eradicate corruption. And that his government lost in the battle between his government and corrupt elements in the polity, with his overthrow by some of his own colleagues.
What this means is that the endemic corruption pre-dates the last sixteen years. Nigeria's history confirms this truth. The major reason which coup makers had for sacking the first civilian government in 1966 after independence was to stop the ten perenters and the growing acts of corruption among government officials.
In 1985, when Mutala Muhammed emerged in the line of leaders the country had witnessed, the same reason to stop corruption was responsible for his sacking of General Yakubu Gowon's government.
And many people had said that if Buhari had considered not dealing with corrupt people, the coming together of other opposition parties and his own party that gave him an upper hand against the former ruling party would have been impossible.
Therefore, Buhari emerging as a president is like an angel (and that is if he is one as being claimed) surrounded by Lucifers and his angels. How he would manage the corrupt elements  around him and put them out of business, instead of them putting him out of business, would be the first consideration. People say this  is a civilian dispensation and not a military affair. Therefore, they say he has to be ready to dialogue and debate issues, rather than resort to the use of force.
Another obstacle he will encounter is about some among Nigerian intellectuals, who have become bribe givers and takers to settle issues than debating issues. At the end, the new president will realize that effecting a change would require the resolve on the part of all Nigerians and more than a soapbox issue.
Nigerians look forward to having a Messiah because they are deprived and want everything that belong to them restored back to them. It is not a matter of witchhunt. The outgoing president, Goodluck Jonathan, has said it all, that if Buhari will probe his government, he must as well probe others before him. What makes such a probe compelling this time is that all oil fields that have been shared (misappropriated) among military Generals and their friends in the past must be restored back to Nigerians.
It is more important to do for Nigerians not to have reason to say all these former Generals are coming to be president after terms as of head of state to protect their ill-gotten wealth. It is already being said that first former military head of state who became president was Olusegun Obasanjo and he created more problems than helping the country. The same messianic song was song for Obasanjo as emerged president. The same song is being sung for Buhari now. But some people are saying, "Now, it is Muhammed Buhari's turn. What will he do? Let us wait and see."
NEWS AND FEATURES
News & Features Around The World