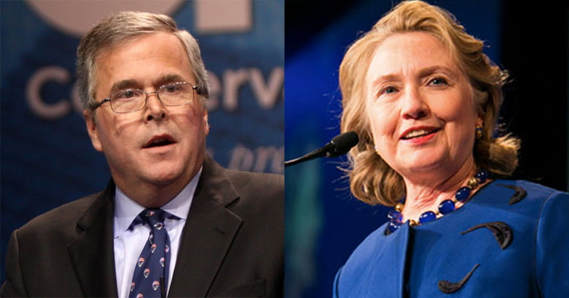 Jeb Bush and Hillary Clinton
Everyone want to be president, just like everyone want to win the lotto and become rich. Why won’t everyone want to be number one?
Free residence and free everything and possibly there may be an assistant, who will help in brushing the teeth every morning or thrice daily.
It just damned on people that the moment a president gets elected for the first term, he or she begins to seek reelection for second term, when there is nothing to show the politician deserves a second term.
This has made people to begin to say there must be something gainful for being the president that makes people in the position to want an encore, even when the music is bitter against them.
The same is applicable to any  political party that the president belongs. The party also wants to remain the ruling party.
Though it is said that this is a democracy, and that there is no ruler, but the ruling party is called the ruler inescapably. And it want to  remain the ruling party at all cost and will do anything to kill the opposition.
The ruling party will do anything allowed under the law and humanly possible to discourage the opposition from upstaging its advantage. And the opposition also wants a taste of pud. The ruling party wants to be there forever for whatever its gains, and the opposition party wants to upstage the ruling party and becomes the ruling party.
People have asked about what these politicians stand to gain for fighting to take on themselves, the job often regarded as lacking appreciation from the public. Why do the politicians want to die serving the people, who don't seem to appreciate what they do? And the politicians say they are dying to serve the public, and the public says the politicians serve themselves.
People say everywhere that politicians are the same all over the world in the matter of self service. People don't say out-rightly that politicians don't serve the people, but that politicians take care of their own needs, before they take care of the people. Meaning politicians’ needs first and the people's needs come second.This is a natural phenomenon. And Psychology agrees, when it comes to the debate about selfishness. The subject says it is natural for humans to be selfish, to consider themselves first ahead of others.
Politician's first gain in public office is public applause and the turning into a celebrity status or maintenance of celebrity status, which may have been attained before election into office.
Of course, everyone want to be in the limelight and portrayed positively by the media. The public office holder enjoys both, aside from regular payment of emolument and the retirement into luxury. And after serving in office, the connections made while in office can serve as links for business connections, and no one will say the former public office holder has unjustly uses a position for personal enrichment.
People are saying this may possibly be the reason that everyone want to be president and never to leave if the opportunity arises, and then pave the way for their wives and children to be president after them, when constitutional provisions demand their departure.In the United States, George Bush followed after his father by becoming president. His brother Jeb Bush also ran for president. Hillary Clinton also wanted to have a taste of the office after her husband.
The major political problem all over Africa is about do nothing sit tight leaders, who after years of ruling transfer the position to their cronies or family members. And people are saying that if there are no attractions, these people would not be dying to be president and to reserve the office for themselves.
Imagine the Republican Party and the Democratic Party's fight over elections and over which party will produce the president, and the fight in other countries among different parties about which party will rule and produce the president? Are all these fights for public interest? People have asked. People are trapped in the system. Kings and Queens are over ruled, and the politicians don't seem better either.
Comment Box is loading comments...
NEWS AND FEATURES
News & Features Around The World