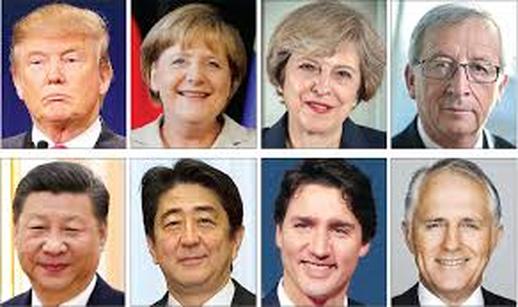 Some the world's new emperors and empresses
Jesus Christ arose in Israel and healed the sick and fed the poor. And that was several years after children of Abraham's crossing into Canaan.
Yes, there was poverty in Canaan too! The Roman emperor saddled with governance over Canaan and his subordinates lacked the knowledge to address the poverty in the land.
When the Roman emperor and his subordinates heard someone said he came to heal and provided for the poor, and said he was a son of God, they went after him and killed him. After the days of the Roman emperors, the world has witnessed Renaissance, which has foisted another set of special breed of human beings on the society.
Just the emperors existed, so were the new celebrities, who accepted the new title, because there was no more room in the royal kingdom of the emperors. New forms of government have since displaced the old imperial palaces, and yet poverty through misgovernance and lack of interest in addressing the needs of the poor by the new ruling class inattention to the needs of commoners and the downtrodden.
When new forms of government began to arrive at colonies of the masters of yore, it was people with education acquired in the colonial capitals that became new rulers, though through election - a new abracadabra way of appointing new emperors. These educated few campaigned with flourish. They told their people that betters were coming, which they said they had fought for and the reason they drove the colonial masters away.
Parents saw the benefits of education. as the means to lift their children to become celebrities and leaders and they invested in their children to attend higher schools of learning, at home and abroad. Children of the poor, who could not afford education in their countries went abroad, where they worked and went to school. On arrival back home, they mostly join the band of new leaders with promises of better tomorrow.
Poverty has festered and ballooned beyond management. There is also poverty in the United States, Britain, Germany and other countrie that people from impoverished countries consider as their Canaan. The poor are said to represent 99 percent of the entire population and only one percent control the wealth.
The 99 and one percent ratio of the poor to the rich is not limited to the rich countries. The poor countries also have the same set up for the poor and the rich. The promise of a better tomorrow are dolled out by the new emperors and the celebrities. And whoever challenges them of mismanagement and lack of human kindness is pursued as an enemy to be rid off them. Reminding people of the popular Christian religion refrain "At is was yesterday, it is today and will be forever."
Leaders all over the world have time and money for state ceremonies, but little attention to address and provide money to feed the poor. And when this is mentioned, they say it is socialism. They point to places like Venezuela and other places, where socialism has run into storms.
And many people are saying capitalism is not better either, because there too many people in poverty. They say the entire world has become like the old Egypt, where Abraham's children sojourned in bondage and sought salvation. Now, everyone is seeking salvation, but no one seems to want to die before going to paradise, because paradise here seems not better than the old Egypt.
The new emperors and their subordinates and the celebrities are busy fighting it out over who will occupy the palaces, and the concern for the needs of the ordinary people don't matter much to them, and to which they just give lip service.
​    Oh no, they are working very hard to the address the issues. You can see the argument among them that some of them take refugees and some don't, while some are immigrant friendly and some don't.
HTML Comment Box is loading comments...
NEWS AND FEATURES
News & Features Around The World