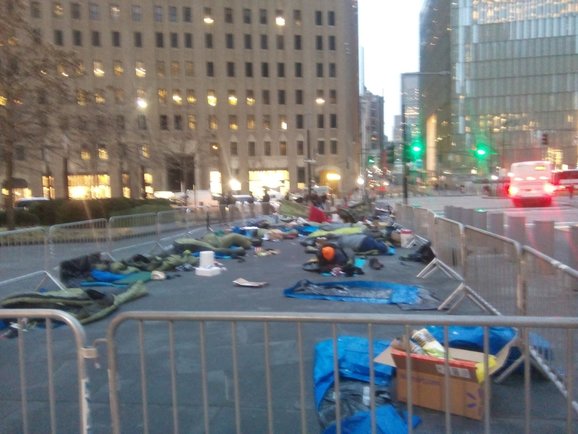 Protesters camped on a walkway in Downtown Manhattan before their disappearance at the weekend.
"Where are they? Have they gone?" People arrived work early on Monday morning and asked questions, about the whereabouts of their forcible neighbors - the protesters.
The protesters had emerged without notice a week ago, seized on private premises, made makeshift stations on roadsides, had processions with accompanying music and placards, and where they had their ways, forced themselves into lobbies of building, shouting incomprehensible statements.
Information went round before the weekend that these unwanted visitors would be heading toward Washington to continue their protests at the presidential inauguration.
Therefore, security arrangements around buildings in Downtown Manhattan to keep the protesters'  at bay involved having the protesters disappear on Friday.
The protests, which many observers did not seem to understand the rational behind them,  tasked security around the neighborhood, with some companies making quick temporary hires to beef up security around their premises. There was also an unusual heavy police presence, which quickly made people ask question about what was amiss in the neighborhood. Many workers expressed joy on Monday that the protesters had disappeared.