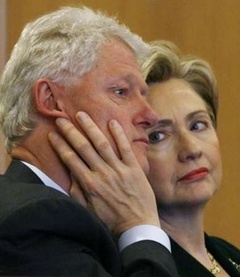 Bill and Hillary
The Clintons undoubtedly have a powerful political machine, built over the years with  mammoth of dependable and undependable followers. The world witnessed the political power of the Clintons when former President Bill Clinton helped turned what would have been a huge political loss for President Barack Obama's second term bid into victory.
Giving credence to what my political science professor in college had termed Clintons political power and an unbeatable machine. But sooner after the professor's comment in 2007, the machine failed when Obama defeated Hillary Clinton in Democratic primaries.
Now, people are saying that the machine may fail again and that the works toward the machine's second time failure has already begun.
Let us cast our mind back to the first time failure of that machine; majority of observers' view before the failure and what caused the first time failure. This reporter was in his second semester at Mercy College shortly before the campaign for the primaries which Hillary lost to Obama. A professor had asked students during a political science class, about whom they thought would emerge as next president of the United States.
John MCCain was seen as a leading candidate in the Republican Party and Hillary was also a leading candidate in the Democratic Party. The professor and majority of students in the class chose Hillary as the likely next president of the U.S. But one student ((this reporter) thought otherwise. He said McCain was the leader of the pack, but his party's misfortune had affected his chances. In that case, he said if the new comer, Obama, could defeat Hillary, he may emerge the next president of the U.S. He questioned the possibility of Hillary defeating Obama based on people's views he heard on the streets.
"What are you saying? Don't you know about the Clintons' political machine?" The class professor had charged, and he and the entire class, except the student analyst approved Clinton as likely the next president of the US. The primaries over; Obama defeated Clinton with Obama's defeat of McCain in the presidential elections over. After the elections, a female student who knew about what happened in her political science class accosted the analyst.
"You said it and it happened," the female student said to the analyst. But he retorted that he saw that Hillary was vulnerable and not just because he said it. Three major reasons was obvious to him that made Hillary vulnerable to losing. The first reason was what seemed to him as some American men unreadiness for a female president. The second reason was a question people asked about why Hillary was going back to the White House after eight years in the place with her husband. And people thought Hillary was competing with her husband and they said it wasn't only the Clintons that God made the White House for.
These three reasons were loud in discussions among people on the streets. It wasn't that Hillary was not popular, but that people were asking questions about her rationale for running, along with questions over the sexual saga that led to the end of the Clintons journey in the White House. People said the reason Hillary did not abandon Bill over Monica Lewinsky's issue was to use the advantage to climb the ladder of leadership.
The analyst followed what he heard people said on the streets and built his own opinion around it and not that he didn't like the Clintons. He made his case in the classroom with what he heard on the streets and it worked. And now that a misstep has surfaced over using a private email against regulations as Secretary of State, everything people said about her running for office last time are also coming back.
Of course, people are already aware about the enormity of the Clintons' political machine power, especially at the party level and that if Hillary runs as being peddled in the news that is making its round, she may possibly win in the primaries if there is no serious challenge at the party level, but that the private email saga may pose serious challenges at the general elections.
NEWS AND FEATURES
News & Features Around The World