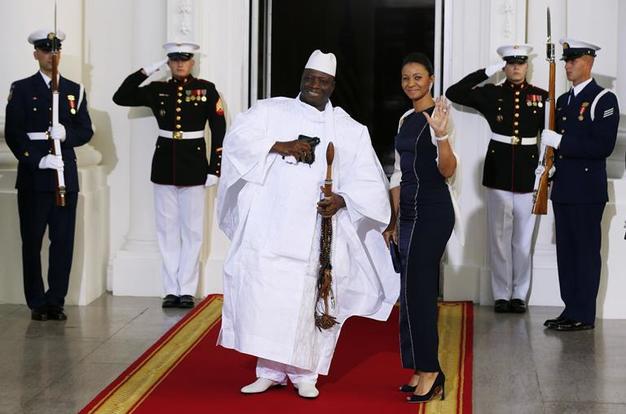 Jammeh and Zineb, his wife, with the beauty and the attraction of office around them
Outgoing President Yahya Jammeh of Gambia became a little more popular, following  concession to challenger before the the country's electoral commission's announcement of election results. And that was before he pulled back his concession.
Apparently, curious observers aware of how Jammeh has ruled Gambia for 22 years like a moving train against reason, querry the rational behind conceding an election to the electoral commision, but not to the challenger.
Questions were asked about whether or not Jammeh had congratulated the winner, while he kept his country waiting for a whole day, before he made a highly ochestrated and well publicised telephone congratulatory concession, that was all over the social media.
Observers are saying that the drama about Jammeh's about turn few days later and reported by all the media, regreting his concession to the challenger, because of what he has described as his later detection of irregularities in the election, amounts to manifestation of Jammeh's hidden insanity.
People are saying that there is something abnormal in any politician, who after conceding defeat in an election, turns around and begins to ask questions about fairness of the election and irregaularities. They say common sense dictates that politicians, whether in Gambia or China or  America, should know that whenever there is a disagreement with the outcome of an election, don't concede and later begin to raise legal challenges, which should have been raised before the concession.
In every sense of the word, Gambia is politically backkward compared to the United States. But Jammeh has every reason to say that if some US politicians could be asking questions about irregularities in just concluded elections and in which the loser has conceded, why wouldn't he also be allowed to do the same in Gambia?
At least, Jammeh was not in the US in 2001, when Al Gore taught the world a lesson about legal challenges in election results, witholding concession until after all answers have been answered and necessary recounting completed before conceding. This will save the country from being pushed to the brink.
A sane politician will not do what Jammeh is doing in Gambia to avoid setting his country on fire, act, if pursued is capable of setting his supporters against the supporters of his challengers. Ghana miraculously escaped that danger on Thursday before Dramani Maham's concession to his challenger, Nana Akufo-Addo, and people had least expected that Jammeh could turn back the hand of the clock in Gambia, after the good tidings that the world had witnessed to the end of his ghastly years in office.
Jammeh needs timely counselling for him to avoid losing the credibility he has gained for his earlier concession to his challenger, while he packs his baggage to leave the government house.
NEWS AND FEATURES
News & Features Around The World