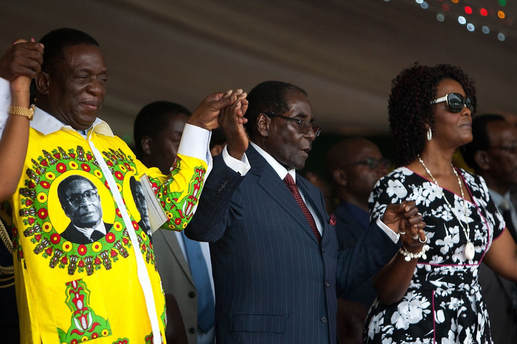 Emmerson Mgangwagwa, Robert and Grace Mugabe (Courtesy:Bulawayo24News)
Events in Zimbabwe between Robert Mugabe and his former deputy, Emmerson Mgangwagwa, and Grace Mugabe, is charactersitics of the life in the palace and state houses.
There, the worship of the power holder, betrayal, death of suspected traitors, self service and lack of respect for the truth by courtiers of power, reign.
All palaces and state houses have their supporters, who know the accepted language in the corridors of power against the truth.
These are the people that the Zimbabwe army officers have indirectly referenced as the criminals around Mugabe. And only few of the courtiers of power in the corridors of power are guiltless of the crime of worshipping the power holder.
The closing up of the heavens against Robert and Grace is a good lesson to whoever that the heavens have opened up to favor to  become the next most powerful man in Zimbabwe to know that power belongs to God and gives it to whoever He favors, and that it is not by power, might or strength and knowledge, but by His grace and not to be abused. David became King in Israel not because he was huge or powerful or knowledgeable. He survived the palace politics by the grace of God.
Let those who play palace politics not trust in their own power or knowledge. Let them learn a little lesson from Mgangwagwa's experience, who fled from Zimbabwe after he was purged from from office for the safety of his life. It was clear from the army's intervention that Mgangwagwa had the abcking of the armed forces. Yet, he fled to be alive. Didn't David too flee from to Philistine to be with enemies of his people to be alive for God's intervention, when the evil pursuit of saul became too dangerous?
How are the mighty fallen? As it was yesterday, it is today. Perhaps, if Mgangwagwa has his hands bloodied from disapearance of palace imaginary enemies and blind support for Robert and Grace against the well being of Zimbabwe and the general interest Zimbabweans, the story may have been different. Perhaps, Robert and Grace could have succeeded in their purging of him from the ruling party and nothing would have happened. They had the power. But they misused the power. They went after a man who might have genuinely supported the power holder without any iota of personal interest.
God loves for Zimbabweans and its manaifestation in the political devleopment in the country concerning Robert's agreement to hand over power to Grace is unquestionable. It shows that God rules in heaven and on earth and he does what pleases him that is beyond our understanding. See the question that people have been asking since it becomes public that the army has put Robert and grace house arrest. Many people have asked about what Robert was looking for again inspite all that God has done for him. People find difficult to understand what has become of him to want to hand over power to his wife.
News reports say that Robert has refused to agree to surrender. But everyone can see that the situation is no longer the same for Robert and Grace as it was before the army's intervention. Reports say further he has been allowed to attend a college graduation, because of the respect the army has for him, but that Grace has been incommunicado! For poor Robert, the whole world seems to be against him for a single decision of planning to turn power over to his wife. The whole of Zimbabwe is almost turning against him, and head of governments in the region are against Robert continuing as Zimbabwe's leader.
Roberts time seems to be up. He seems to have fallen. And the words that David used long time age, when King Saul failed to kill him and died pursuing him, seems to have sounded in Zimbabwe. How are the mighty fallen? Whoever becomes the next most powerful man of Zimbabwe should be careful of the courtiers of in the corridors of power. Do what is good for Zimbabawe and Zimbabweans, and not yourself and the criminals around you as advisers and supporters.
Comment Box is loading comments...
NEWS AND FEATURES
News & Features Around The World