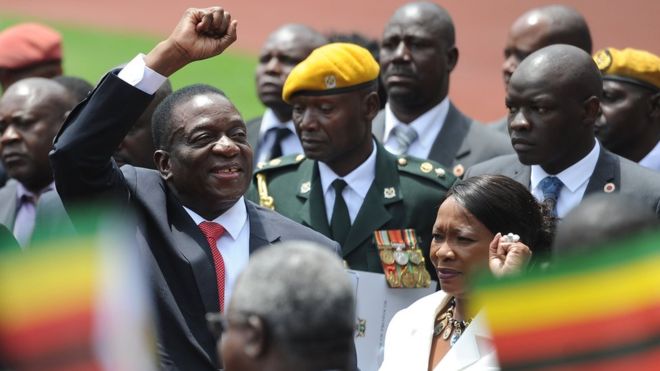 Mnangagwa and wife during his transformation to president on Friday (Courtesy:BBC)
Emmerson Mnangagwa was sworn into office as the new president of Zimbabwe in a ceremony in Harare on Friday.
Coming two weeks after he was booted from office as vice president by former President Robert Mugabe over power struggle and consequent palace coup.
Mnangagwa has promised Zimbabweans jobs in a speech  at the swearing ceremony. The BBC reports show that about 90 percent Zimbabweans are unemployed,. Observers say that lack of employment opportunities might have been reason for Mugabe's lost of credibility among the citizens and cites the trouble and discontentment associated with joblessness. And that Mnangagwa has hit the right cord.
However, people are quick to say that it is easy to make a promise, but that the fulfillment of a promise is what matters and that politicians are good at making promises, but they are bad at fulfilling them. Curious observers are concerned that nothing may have changed in Zimbabwe, becuase according to them, Mnangwagwa himself has been part of a decade old decadence under Mugabe, and  who he has merely been fortunate to be beneficiary of a power struggle and consequent palace coup.
People also note that without the power struggle and the palace coup, Zimbabweans would have kept quiet and no one outside rg country would have known how displeased they were with Mugabe and his team.  They say Mnangwagw having been a long time loyal member of Mugabe's team as deputy president, and in charge of and portfolios, until the struggle over power with Mrs. Mugabe began and was consequently stripped of the two portfolios.
As vice president who headed the Ministry of Justice, Legal and Parliamentary Affairs, what did he do toward making the country pursue jobs for Zimbabweans under Mugabe? Did he do anything to make Mugabe aware of the danger that mass unemployment posed to the administration? Although, Mnangagwa can be said to know Zimbabwe very well, having held so many offices as minister of defense, minister of rural housing and social amenities and acting minister of fiance, before rising to be vice president and now president.
Reports say Mnangagwa himself in his inaugural speech paid tribute to Mugabe as "a father, mentor, comrade-in-arms and my leader". One question that curious observers have asked is that If Zimbabweans have trooped out calling for Mugabe's ouster for lack of mass unemployment in the country, would Mnangagwa have retained his position or become president with Mugabe's fall or would he not have lost his job as well?
Aside from the question about Mnangagwa's opportunistic rise under Mugabe as a loyal comrade, many people in civilized countries wonder how a country can be governed with such a high rate of unemployment and the leaders can sleep with two eyes close without the fear of the situation suddenly springing out of control. They say say it was what put Mugabe in trouble and that if Mugabe had provided jobs and make life amenable for the people, he could probably have succeeded changing the question and makes the wife his successor, without anyone raising a question. But hungry people can be angry.
It is noted that that type of situation was first witnessed in France that led to a popular revolution. Mnangagwa has the opportunity to do what he has promised and avert a popular in Zimbabwe. Since Mnangagwa had been witness to the trouble from Mugabe's fruitless years, the onus is on him to do good or reap the whirlwind like his former boss.
HTML Comment Box is loading comments...
NEWS AND FEATURES
News & Features Around The World