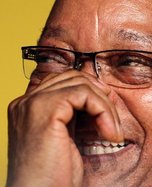 Jacob Zuma on Freedom Day
President Jacob Zuma of South Africa's trouble is increasing, with workers booing him at the May Day rally and asking him to resign, according to BBC's report.
Zuma's countenance has changed to anger and worry, compared to his last appearance, when he appeared at for the 23 years anniversary of South Africa's freedom, and he laughed in derision at a gathering in Pretoria, where Nelson Mandela's former assistant criticized him and asked him to resign, along Mandela's grand daughter's call on him to step down.
There is also a motion of no confidence waiting at the parliament against the president, who is fast becoming the most unpopular leader since the country's freedom from apartheid rule. 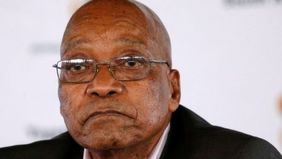 Zuma at workers' day rally
Zuma is down, but definitely  not out. He may be in trouble over corruption allegations, loss of patronage from some core members of his party; the party, which official hierarchy still supports. But there is possibility that this president cannot be said to be enjoying sound sleep every night with his two eyes closed.
Look at the photograph above and the one below it. The photograph above was taken about a week ago, when he burst into laughter, after he said he heard that the gathering at Pretoria in celebration of 23 years pf freedom were not celebrating.
But today, the photograph below shows Zuma's face, at the workers' May Day celebration. Face screwed up in disbelief, about how workers in the country have turned against him. Probably stunned by the face of reality about how huge the opposition against has grown. As far as the issue of whether he could forced to step down from of office between now and the end of his term is concerned, Zuma has no need to worried.
The ANC will help paddle him to safety. But whether he will have any force to decide who succeeds him will be where he will meet his waterloo. Many people are already saying that if Zuma seeks votes today from South Africans, knowing who he is as Zuma that the world knows today, whether he could win an election. Not many people can boastfully say he will. Many are actually saying he will
lose, if stands for an election today, even as a leader of the ANC. 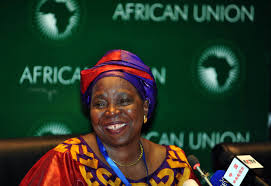 Nkosazana Dlamini-Zuma
Zuma has said that he is not leaving the ANC after his term, but that he will continue to offer selfless service to the ANC. But would that take away all that have already been known of Zuma during his term in office as president, enough for people to trust him,and for him to tell them who to give their votes?
Characteristics with which Zuma has been portrayed in office has not only blurred Nkosazana Dlamini Zuma's chances in the ANC, but has also put the ANC in a very difficult position, about who to support for election next time around. The floor, may have to be thrown open for as many candidates as want to run, or who want to test the water.
It is here that the current vice president, Cyril Ramaphosa, may become a beneficiary of Zuma's recklessness and carelessness in office.
NEWS AND FEATURES
News & Features Around The World