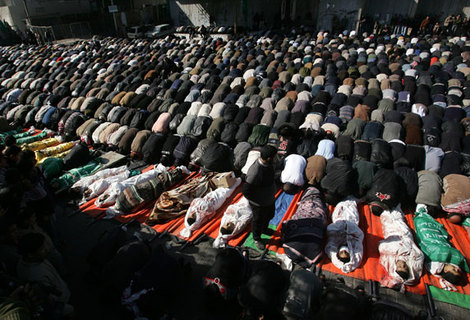 Mourners pray over children's bodies Courtesy:www.vtjp.org)
United Nations' field workers in Gaza have voiced opposition against Israel's attack on Jabaliya Girls' Elementary School, one of its Refugee camps and killing 15 Palestinian children. Israel did not deny the attack on a school the UN workers said had been turned into a Refugee camp. But Israel said it attacked the school because there were gun fires targeted at Israeli soldiers from the school.
UN workers said that it had informed Israeli forces 7 times that the school was a Refugee camp and wondered why Israel still attacked and killed innocent children in shelter with their parents in the school.
They were children who had vacated areas Israel had warned civilians to vacate. It means that there is no place for civilians to hide in the war between Israel and Palestine. It was the second time in a week Israel had killed children in schools designated by the UN as Refugee camps. The first attack killed eight children.
Already, about 1000 Palestinians mostly civilians and 55 Israelis had been killed in 22 days of fighting. The Israel commander does not appear to have remorse about the world body turning the fire against his side as targeting civilians. He said things are going to get messier because Hamas uses civilians as shields.
It is one and the same excuse that Israel has been giving, apart from the drive to destroy tunnels it accuses Hamas of building that Israel has been using to destroy anything in sight, giving meaning to the saying that every tactics is fair in war.
Hamas on its part insists that it will not stop shooting rockets into Israel until all the blockades against it are removed, despite Palestine's huge human loss in comparison to that of Israel.
NEWS AND FEATURES
News & Features Around The World