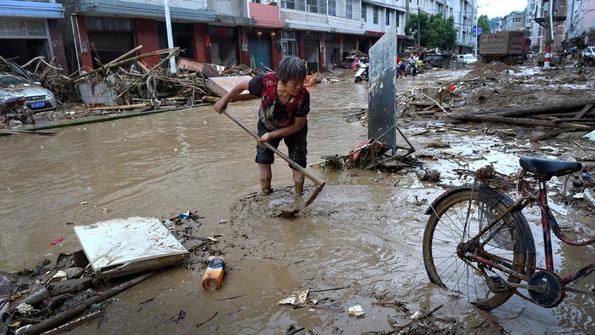 A woman redeems remnants after visitation of a killer weather situation (Courtesy:WeatherChannel)
The weather is hot in the north east of the United States. Having been accustomed to extreme cold weather,some people here find it difficult getting roasted.
People in some areas around the world are accustomed to getting roasted in hot weather, so hot weather is nothing novel to them.
People talk derisively about the good weather in their countries round the year as warm and comforting, in comparison to the United States, where the weather turns and turns, from bad to worse and from worse to bad. and to worse.
Obviously,they say the search for money and survival from lack of money, makes the choice for a life in destructive weather zones preferable to areas with good weather, which lack the means for them to make ends meet as humans. They express thanks all the time for surviving bad weather situation.
In winter, when the weather is extremely hot, the rich in the U.S. are said to delight in running to Florida, where the weather is said to be warm like some other parts of the world. It is one of the reasons some folks talk about getting rich at all cost, because according to them the rich have choices with the power of money at disposal. The say that the poor folks are stuck in whatever bad situation they find themselves.
There is respite from the hot weather for residents in the North East of the U.S, as one think about remaining home until time to step out to go to work. The air conditioner is there for temporary comfort. But as one step out into the open walking into the car, the muggy weather gives a sign of warning that it will not easy walking the street.
The door to the car is opened. The heat in the car is enough to bring the blood to boiling in the veins. The air conditioner goes into work again. At last, the car is parked and one goes out into the street. People are in all sorts of dresses that exposes the anatomy, enough to show that everyone is working against being roasted. No matter how the poor run from being roasted, they have few choices, compared to the rich folks.
It is the summer season, the roasting season, opposite of the Winter and the Fall season. The winter is cold and at times extremely cold that people pray for the season to go away and for the Fall to arrive. The Fall is a season for the lovers. Cool and sweet. Though the rains may be much, it is said to be preferable to the deadly cold of winter. Hurricanes, Tornadoes and Typhoons are not friends to humanity. They travel with thunderstorms, excessive flooding and destruction.
The rich has more money set aside for energy from the use of air conditioner. Of course, the rich uses the air conditioner all the time summer, whether the weather is roasting or not. The poor has to manage his income to pay staggering energy bill from the use of air conditioner in the home, when the weather becomes deadly hot.
Just like deadly cold that kills, and tasks the emergency services on saving lives in winter, when the weather becomes deadly, the same is applicable to the deadly summer weather. And so, it is no surprise that one hears prayers of thanksgiving all the time from those still alive continuously in this deadly world.
​   They may say there is no God in their thoughts, but in their truthful reaction to the hard situations, they sing the lullaby to the creator for his mercy.
Comment Form is loading comments...
NEWS AND FEATURES
News & Features Around The World