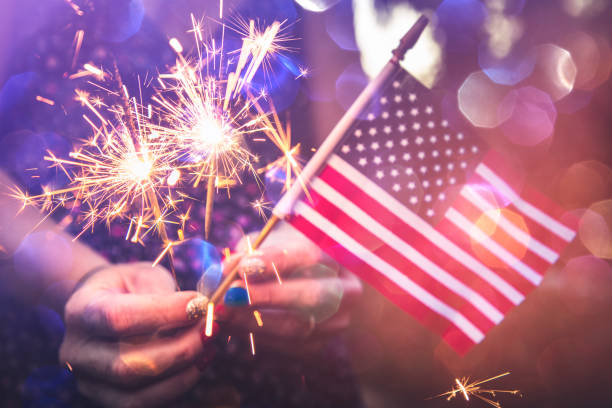 Firework and an American flag on display (Courtesy: istock)
July 4 independence caused a little difference in my household compared to past celebrations. My two female grandchildren made the day memorable. Tiwa and Adele told me they were following their mother for a firework. I hardly believed them until I saw their mother dressing them for the outing. They returned home late, and I was fast asleep when they returned.
"We saw a lot of fireworks," Adele told me the next day, later joined by Tiwa, who enlivened their experience, and they asked if I had ever witnessed a firework. " I told the kids I never had time going out for a firework since I arrived this shore 20 years ago. And that I have been busy working to establish my feet for the future.
This discussion reminds me of a day I returned from Mega Evers College in Brooklyn and lost my wallet on a bus. I entered a Barbershop to cut my hair. The Barber finished taking care of my hair. I looked in my pockets and could not find my purse. I wondered how I would pay the Barber. Then, a young man who seemed to have lost his way entered the Barber's shop holding my purse in his hand.
"That is my purse," "I said. He handed over the purse to me without an argument and said he found it on a bus seat. He was not looking for me. He just entered the shop for what only God knew. I asked him if he had found $20.00 in the purse. He said he did
not. The question I asked about the $20 angered the Barber who watched and listened to me and the good Samaritan. The Barber later told me it was senseless asking about a $20 note after recovering my identity cards and credit cards. The young man departed after a show of appreciation from me.
The Barber then advised me to slow down. "You are always in a hurry anything you come here. Slow down." I told the Barber I could not slow down because I had to accomplish specific goals. I told the Barber I arrived in the United States at an advanced
level.  I was sincere when I told my grandchildren I had never been to fireworks. I worked and went to school at the same time. July 4 holiday was a bonanza on my calendar for making extra bucks.
My inability to attend the independence anniversary fireworks does not mean I don't love America. I love America with all my heart. America has given me what I least thought of possible after years of wastage in my native country. I possibly will be the leader to take my country out of the woods to a land possibility if educational and financial aid was available there for the children of the poor to amass knowledge.
Hard work also pays off in America. However, the America I knew in eighteen years differs from the America of the last two years. America should choose what has worked for it in the past and do away with the current political adventurism that helps no one except the adventurers. This journey to nowhere, like the title of one of the books we read in school for the artificial intelligence literature, be jettisoned for America to continue with the continuity of sweet July 4.
The July 4 sweet celebration was reechoed by a co-worker who said he was out almost all night, had a swell time drinking, and still felt the hangover the next day at work.
Comment Box is loading comments...
NEWS AND FEATURES
News & Features Around The World