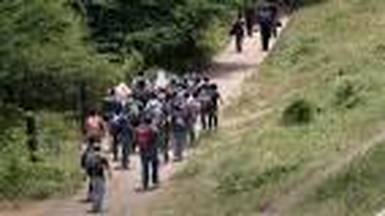 Undocumented immigrants crossing the border
Thousands of undocumented immigrants will be sought by immigration authorities in the United States for deportation from this month having entered the country illegally, news reports said.
Observers say that the revelation has made immigration the number one food for thought in the U.S and that it has strongly displaced any other in human debates. How did they enter? Why now seeking them for deportation after they have been allowed in?
Officials say the U.S border is not open to illegal immigration. The story comes from the New York Times. "That surge overwhelmed the detention facilities, sending most families into American cities with little more than a court summons. Many failed to appear in court on the appointed days."
People say that these immigrants came in droves from the Central American countries through the Mexican border. Law enforcement agents arrested as many as they could, and when there was no more room in the vehicles to convey culprits to the courtroom  or to the facilities from where they would be taken to court and they are still expected to report to the courtroom. But foul, not many of them has reported in the court for hearing.
Do we call them undocumented immigrants or improperly documented and expected to appear in court, but have instead vanished into the thin air? What politicians and civil rights activists and politicians will do with our lives is beyond imagination, many people are complaining silently. They say that politicians and civil rights activists have made the usage of 'legal and illegal' illegal in immigration debates and have  replaced them with documented and undocumented, all in the bid of gathering votes to win elections. The truth no longer has a place in their dictionary. And it is one of the reasons that many Americans say Washington politicians don't get it.
Thousands of immigrants are said to come into the US improperly documented on daily basis in that manner through the Mexican border. What question does this raise about legal and illegal immigration? Doesn't it show that illegal immigration pays off than legal immigration, when properly documented immigrants have to wait on the line for several years at the mercy of the Immigration and Embassy officials? While they are still waiting for five years or more for legal papers, millions of other people are walking into the country without proper papers more than summons asking them to appear in court, but may never be seen again to be held accountable, because they have been improperly processed.
Another question is whether or not there are cartels aiding these undocumented immigrants to walk through wide expanse of borders and benefiting financially from the proceeds? It is no longer an imagination, but real,  that anyone willing to enter the US through the backdoor can first find a way to get into one of the Central American countries, and what remains from there will be easy walk across the Mexican border. Whether this encourages or discourages illegal immigration is for the Washington law makers to decide. The application of the law is supposed to deter anyone flouting the law, but when thousands of people are flouting the law, and they are encouraged to continue, what becomes the rule of law?