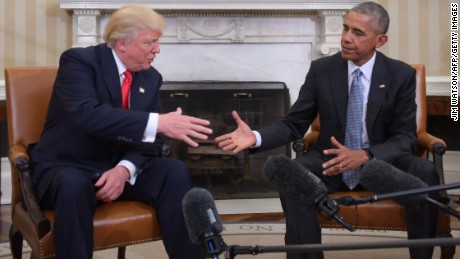 President Donald Trump and President Barack Obama
The election of President Barack Obama in 2008 brought a symbolic change, being the first election of a man adjudged as the country's first black president. When he proclaimed on the night of his election that change had arrived in America, people did not think it was the symbolic change of just an election of a black man as president, but a change that would affect their economic existence.
By the time President Obama assumed powers, the economy was already in trouble. Washington politicians were on their own, people believed that politicians were careless about whatever happened to the people. Part of the change they expected was that Obama would clean the Augean Stable and power restored to the people.
But instead of restoring power to the people, the people saw the banks bailed out to forestall total economic breakdown, which analysts said would have led to seeing people jumping to their death through the windows. Yes, Obama saved the situation, but the people seemed left the way he met them.Why were only the banks deserving of help from the people's patrimony and the people left uncompensated.
People already started working two jobs.There are people working three jobs, if the hours in other jobs allow them. Rents were rising and wages were not. Bills have to be paid. People say after you pay your rent, whatever you have left can only be enough to pay other bills and continuing like that from payday to payday and working back to back, is not what anyone thinks is ideal in prosperous America.
President Obama barely won the reelection against Mitt Romney by the help of the media, who exposed Romney's disposition towards the 47 percent Americans, in his conversation, which many people believed deprived him of the election against President Obama. Not even the loss in the Congressional election in 2014 was enough warning to the Democrats about the danger ahead, if the party failed to be inclusive for all Americans.
The Democrats counted more on their candidates' star power and their political machine than the need to connect with voters, not only in the cities but more in the battleground states, where massive loss of jobs dotted the landscape. Yet, statistics were showing that more and more jobs were being created! And that decision had sealed the hope of Bernie Sanders, which truth later turned his supporters against the party's candidate.
The lack of cohesion between the White house on one hand and the Democratic Party National headquarters on the other became manifest with President Obama campaigning for someone to succeed him, but the position of the candidate's husband on Obamacare was that of strong opposition. This showed the picture that Washington politicians had cut for themselves. People began to think of the need for a change at the center.
A Latino woman once said that she thought that when one party had spent eight years in office, it should automatically be the turn of the other party. She was educated about the system and that not the way she had thought. It was apparent by now that politicians in both parties had outspent their political capital. There was a need for a change. There was a need to have someone, who has never been in Washington before, to shake up Washington!