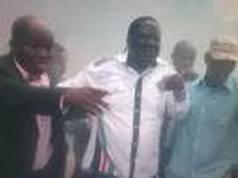 Odinga being led away by his supporters (Courtesy: Standarddigital.com)
,      The news from Kenya on Monday was the unpleasant tear gassing of the opposition leader, Raila Odinga by the police, during the protest he led against the country's electoral commissioner.
​    Odinga's photograph appeared on Standard Digital newspaper's website, being led away by his supporters with his eyes filled with tears.
News reports said that Odinga and his supporters were at the Independent and Boundary Electoral Commission's office,  protesting with placards for the removal of the commissioner, when the overzealous police on guard resorted to the use of tear gas and shot directly into the eyes of protesters led by Odinga.
Of course, the government was said to have warned against the much reported protest that was aimed by the opposition alleged role of the electoral commissioner in the rigging of the election that brought Uhuru Kenyatta to power.
Could the police have acted on their own or acting on the orders from the above? Is not it part of the police work for it to protect government institutions as well as members of the public, especially protesters who have a role to play at ensuring that the government do what is right at all times? When protesters become target of tear gas, who would want to be on the streets to protest against unwanted government policies?
These are questions that observers are asking but which only Kenya politicians can answer coupled with how the Kenyan police think that tear gassing the opposition protesters would help the country's democracy. The report from Kenya also echoes the past political experience of Kenyans, who witnessed about one thousand deaths during an earlier election followed by conflict, and the resultant landing of President Uhuru Kenyatta and his deputy,  William Ruto, in the International Criminal Court, in the Hague.
​    However, the news of the encounter between the police and the opposition protesters was eclipsed on Tuesday by the announcement of Lucy Kibaki's death. As the wife of former President Mwai Kibaki, she is described by Daily Nation newspaper as conservative, and one who fought like a tigress in defense of her home against idle politicians turning the ground to a common park and against rumors of a second wife by her husband.
The relevance of  Lucy Kibaki's story and that of the teargassed opposition members is her being a fighter like politicians in the opposition, who are always in a struggle against the sitting government risking arrests, imprisonment and death, like the journalists whose work is to hold the government accountable to the people. As unpleasant as Odinga's experience may have been with the tear gas does not mean an end to calling the government's attention to the rot in the system.
The news said that Lucy Kibaki died with members of her family at her bedside in London. The news did not reveal the cause of death.
NEWS AND FEATURES
News & Features Around The World