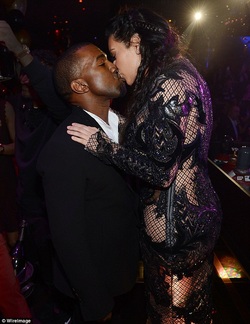 Kanye & Kim (Courtesy: London Mail)
Kanye West and Kim Kardashian are currently the toast of the press, and
probably one of the most popular celebrity couple. Thanks to the latest news
of their being expectant parents. The rating of the couple in the eyes of the
public following their announcement that they are expecting a baby together
represents a testimony of the importance of a child in relationship as a
universal culture, some observers say.
Since Kanye's announcement and Kim's confirmation of her pregancy, the
public response has been mixed, some positive and others negatve, based on
different people's perception of the couple. Some members of the public
say Kanye has scored a goal. Others say Kim has done what is right.
"I don't  care whatever the two decide to do with their life. It is none of my
business. I believe those who have time discussing it have nothing to do with
their time," Joe Fash, a security officer with Universal Protection Service said.
"There is nothing wrong or special with Kim getting pregant. I like it. It means
they have been having good sex and that is a good development. I will like to
see Kim carrying a protruding stomach when her pregnancy is around five to
six months," Sanchez of Manhattan said.
Ayot, a woman from Nigeria and resident in Brooklyn is happy for Kanye and
Kim and looks forward to see Kim deliver a child prodigy. She says Kim's love for Kanye is the reason she is having a child
with him.
Kim has been talking about her experience as an expectant mother. Talking about pregnancy and morning sickness, she
describes it as not without pain, but that she has been strong with it. Observers see her transiting from discussing fashion
and modelling to a woman's ultimate calling of mothehood as a wonderful experience.
There are people who wish Kanye and Kim have been like angels with no human baggage. While others ask whether there
are humans without baggage, as discussions of Kim's earlier marriage and divorce proceedings becomes news topic.
No matter what some people are saying, Kanye is all over his Kim, as if saying it is our love for each other is all that matters.
As optimists say his capture of Kim has been consolidated.