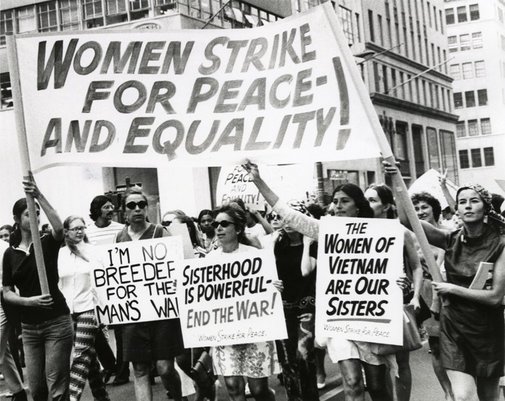 Women protesting and demonstrating for rights (Courtesy: ThinkProgress)
Wednesday was International Women's Day, marked in the United States as a day women agreed to stay away from work, and from including schools. But there were no words about the same women telling their children to stay away from school.
Thus that mean a case of soldiers abandoning their posts and leaving the country at the enemy's disposal?
The announcement was on the television news all week about women's intention in the country to mark the International Women's Day by staying away from work as protest against President Donald Trump.
Whether the women stayed away from work not visible in the public, because there were women on the train early in the morning on their way to work and there were women visibly at work all over the New York City.
However, news reports said on Thursday morning that the call by the women managed by some few women managing women's affairs from somewhere backfired.
The women's incessant public demonstrations is a reminder of a book "Herland" by Charlotte Perkins Gilman ,used in most colleges for Utopian Literature classes. As a book of literature, the "Herland" can both be described as Utopian and Dystopian at the same time. But the decision by women to have their own land, separated from men, against the natural arrangement obtained in a normal society, cannot be anything but Dystopian.
Many people believe that the attempt by women to separate and have their own separate society in "Herland" was unsuccessful, because of the unnaturalness of the pursuit. It is believed that men and women are joined together in the society for a purpose. For example, it is believed that a man cannot singularly procreate without the woman, and that the woman's attempt at procreating without the man is also seen as ambiguous. Each has a place, and a role, as obtained in a household.
The man cannot usurp the role of the woman and the woman cannot usurp the role of the man. However, it is common to hear that what a man can do, a woman can do well too. This is where the problem between the role of the man and the woman in the society seems to have begun. The world comprises both areas where men are in control of the household and the woman is also in control.
. In the most advanced societies, the woman is in control of the household, while the man is in control of the home in less advanced societies. Manifestly, it is said that the women-liberation movement may have begun in the advanced societies, and it has been spreading through the less advanced societies, with women's increasing access to higher education.
And notwithstanding the high level of women's movement gains in the advanced society, where men in countries like the United States complain of playing the second fiddle in the home, the women are still insatiable about the arrangement in place. They want the political leadership. But they are unaware of the disposition of the men toward their demand for political leadership. Many men in the U.S. have vowed not to vote for a woman as president. Because, according to some men interview in general discussions, it will be too much power for women to control the home and control the country!
In essence, the men are saying that the country belong to both men and women, and not only to women! The men are not carrying placards in protest and demonstrations, but it is what they express from their mind as they discuss in public, in opposition to what they call "the enormous power" of the woman in the home, and asking about what else do the women want. The men seems to be saying that this is our land (as belonging to men and women) and not just her land!
NEWS AND FEATURES
News & Features Around The World