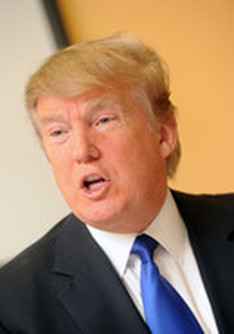 .     The new poll numbers still have Donald Trump leading the pack of the Republican Party presidential candidates, despite the continuous media grilling of Trump on his statement that many Moslems celebrated the attack on the World Trade Center. The CNN continued the grilling on Tuesday, from where the MSNBC stopped on Monday.
The focus of the media questioning of Trump is an effort to verify the truth or otherwise of Trump's statement that there were celebrations by some Moslems in New Jersey as the twin tower was brought down by terrorists on November 11 2001.
In the MSNBC interview, Trump proves equal to the challenge that his  statement  pose to his presidential ambition. He answered every question and made his interviewers look like people who needed further research work on the subject of the interview. Manifestly, Trump has not been avoiding media questions, unlike some other candidates.
There are some smart guys in the media who have said that there is no way Trump can be successfully proved to be wrong on his statement about certain Moslems celebrations in New Jersey as the twin tower came down. But there are some guys still in the media, who believe they have got what they need to cut Trump down to size or get him out of the race out-rightly.
But in looking continuously on the subject, it is like the more they dwell on the subject, the more exposure they create for Trump.This is what the CNN's interview of former Mayor Rudy Giuliani of New York has proved on the matter. The interviewers wanted to know from Guiiiani if there was ever a celebration by a number of Moslems when the twin tower came down. Giuliani told the interviewers that there were pockets of celebrations., but not in the in the thousands as Trump had said. He was again asked whether he was saying Trump had lied. Giuliani said that Trump had not lied, but that he may have exaggerated the number as an entertainer.
The interviewer wanted Giuliani to say or were working to get Guiliano to say that Trump had lied, but they did not get that. Then, they tried to use the word exaggeration to mean that Trump was not right, but Giuliani still said Trump could not have been wrong, because there were pockets of celebrations, and that he would not be the one to help make Trump prove what he had said. He said Trump should be able to provide an evidence himself.
The same question about Trump's statement that some Moslems celebrated the attack on the twin towers had earlier been put to Chris Christie. In his response, Christie first said he could not have known about it, but days later said he did not think there was any type of celebration in New Jersey, when the twin tower came down and insisted he thought Trump was not right. Though, Christie, a federal prosecutor in New Jersey at the time said his major concerns following the attack on the twin towers were his wife and brother, who both worked in Downtown Manhattan.
Obviously, Trump is ahead of Christie in the poll and couldn't have been the right person for the type of interview against an opponent. People are saying that Trump is contending with two challenges - the liberal media and Republican or Conservative media. They say that the liberal media does not want a candidate, who would prove difficult for its anointed candidate. Second, they say the Republican or Conservative media think Trump by his usage of words against its well defined ways of discussing issues like immigration and others has defied their ethos and is not viewed as fit to represent the Republican Party. And so his statement that some Moslems' celebrated 9/11 has turned into an opportunity to hang him. But Trump is proving more intelligent than his accusers.
The truth is that Trump did not say all Moslems in New Jersey, but his mention of thousands may mean multitude of Moslems or renegade Moslems or  pockets of celebrations as confirmed by Guiliano. And by the usage of pockets of celebration, even if it was not in thousand as said by Trump, that was still an admission that there were celebrations. Period.
Some people are asking that when it comes to verbal exaggeration, is there anyone who doesn't, including the guys in the media, and that how many people have been condemned for having verbally exaggerated an issue? Why is the media after Trump? Observes are saying because he is not the media approved candidate or that he has defied the media's expectation for not towing or following known rules about decency to avoid getting a section of the population angry so that he can be sure of votes..
Trump has said that he is careless about the outcome of his candidature in the presidential election and that the fear of failing in the bid would not stop him from saying things naturally as he should. He means that he would not allow anyone including the media to gag hm. And people are asking that If Trump is relying on a pocket of white people as his supporters and that that may not not give him victory in a presidential election. Observers ask  why should that be the problem to anyone in the media? They ask whether the media not supposed to be an umpire and leave the issue about who wins the election to voters' decision?
Just last week, Ben Carson was interviewed on the Fox News on his view about the media. His answer to the question is a tell-tale of the true situation that shows different section of the media as representatives of different ideological and political interests. Carson's damning verdict on the media is a lesson that the media itself requires certain corrective measures for the public to believe the truth the media claims to be reporting
NEWS AND FEATURES
News & Features Around The World