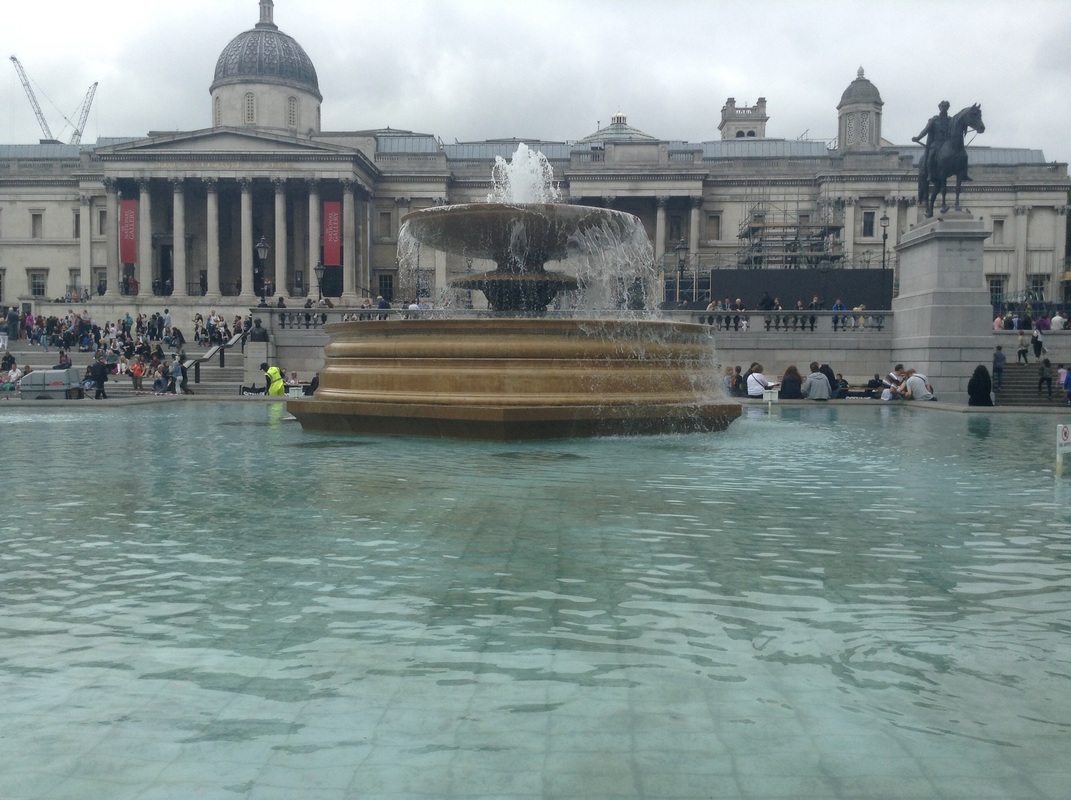 Trafalgar Square
One day in London is like one day in heaven. Why? You see as much people thronging the streets around Westminster as one will one day see people throng heaven, because many people want to go heaven, and without dying.
A journey from the Heathrow Airport to the Westminster and the Trafalgar Square represents an open window and an opportunity to see London, where the mass transit train system is called 'The underground train', unlike in New York where it is called 'The subway'. And whether a Subway or Underground, they perform similar function of moving mass of people.
As you get into the underground rail system in London, you discover that the trains are painted red, blue and cream colors. Some of the trains that are old look horrible in those colors, while the trains that are still new look really good in them.
Again, as you journey through Earls Court to Kessington Olympia and to Noting Hill; from Bayswater to Paddington, and from Bakers Street to Westminster, you suddenly begin to see arrays of escalators.  "Is London a city of escalators?"
The answer to the question is that there are so many escalators in London that make their the numbers and use of escalators in other cities pale to irrelevance insignificance. London don't just have escalators, it ensures these escalators have deliberate architectural touch that make them beautiful. They seem they are not just escalators to move people, but ensure people see beautiful pieces of artworks decorate the walls.
Escalators in London are mesmerizing. In addition to this is the length of the underground trains. You stand in the middle of the train and seem to be unable to see the end of both sides of the train. You say self-consciously that this is a crowd packer.
Making the connections to where you are heading as a first time visitor is not easy. You have to stop people to ask questions, to avoid getting lost or waste valuable time running in a circus, when seeking help could get you to wherever you have in mind to go.
I was heading toward Westminster and Trafalgar Square, but I almost got lost along the way. The trouble began from the Heathrow Airport, from where I chose to travel underground for 12 pounds, instead of going to town on the express train for 35 pounds.  A temporary trouble began when it almost almost became impossible to get a ticket to go underground.
I knew that I needed to get a ticket for the whole day round the city ride following an enquiry. But the vending machine refused my credit card. A young man who assisted toward resolving the debacle told me to use my bank card, instead of a credit card, I refused. I said I only use my bank card outside the United States for highly important matters.
I was asked to go to Bureau-de-change to get my dollars changed to pounds Sterling. I did. But that still did not resolve the problem, because the ticket vending machine had no provision for cash payment. I was taken to another set of vending machine near the entrance into the underground.
All the machines near the entrance into the underground also did not take cash. I ended queuing on a long line before a counter, but the line moved fast and I eventually got a ticket for 12 pounds that ensured my journey to Westminster and Trafalgar Square.
At Westminster, you see the double decker buses, the Parliament building, the square with flags of Commonwealth countries and the statutes of important British political figures. And you see a large crowd. You know that you are not yet at the Trafalgar Square. A young man tells you on enquiry that going to the Trafalgar will entail fifteen minutes walk.
You almost decided to abandon the quest. But something seeking an adventure asks you to go ahead. You walk. Along the way, you continue to see statutes of men and women with marks about how they made Britain proud in wars. It suddenly damns on you that immediately to your left is the British War Museum.
Under ten minutes, you arrive at the Trafalgar Square. "This Trafalgar," you said to yourself. The crowd surged and you wondered where they were from and said they must have been visiting just like you. People delightedly take pictures with the lions' statutes,  mount the podium  and sit round the fountain.
After feeding the eyes and shooting so many photographs and videos, you remember the need to return to the airport and the Piccadilly line comes into your attention. People tell you not to forget it as the only train line to the airport. However, the train on Piccadilly line developed a fault, and consequently jumped into another train to Acton Town, where we returned into another Trianon the Piccadilly line.
Evidently, one can't travel from the Westminster to the Heathrow Airport without traveling the Piccadilly line if one's choice is to travel underground.
NEWS AND FEATURES
News & Features Around The World