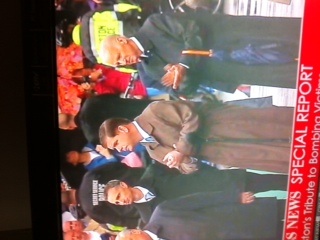 At exactly 2.47 pm today, a moment of silence was observed at the Boston Marathon's finishing line in memory of the 2013 terror attack. Today's ceremony is said to be a mark to reclaim the marathon's finishing line and a tribute to the 2013 bombing victims.
A memorial service was earlier held at the Convention Center in Boston attended by the  United States Vice President Joe Biden.
Many people arrived at the Boston Marathon with their lives and limbs. A short while later, two explosions went off near the finishing line, killed three and wounded over 200 others. 16 among the wounded are today without without limbs.
The bombing shook the world with attention on Boston in lock down, while the police sought for the assailants. One of the bombers, Tarmerlan Tsarnaev, died in a face-off with the police; his younger brother, Dzhokhar, arrested and had been charged by the police.