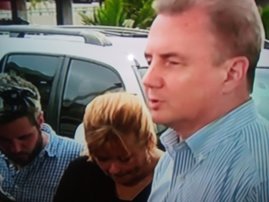 Airport manager addressing the media.
Five people have been reported killed at the Ft. Lauderdale Air[port in Florida, United States, on Friday, following a gun man's rampade at the airport's Terminal 2. One man is reported to be under arrest, but initially uncertain, if the arrested fellow is the shooter. The shooter has been identified as Esteban Santiago.
The police confirmed that the shooter shot 13 people and that five people had succumbed to the wounds sustained from the incident, while eight people are receiving treatment. The airport is consequently under lockdown.
Fox news confirmed that the shooter was on a Canadian Airlines flight with a military id. He identified himself on arriaval of his flight and his gun checked in. Later retrieved the gun and went into the bathroom, where he loaded the gun and began shooting.
Reports contain information about people seeing a shooter shooting people on the head and disappearing into the thin air. Information has also confirmed that he was traveling from Anchorage in Alaska, United States to Florida and not from Canada. Although he traveled on Canada Airlines from Alaska and that the shooting happened at the baggage claim area.
Meanwhile, the airport in Ft. Lauderdale is under siege, following the lockdown as authorities are working to return normalcy. There is a report of a minor vehicular movement. It appears that law enforcement are still looking to confirm if there are other  gun men, and uniformed men are moving about with long guns.
Another  report shows that there is no movement in the airport, based on law enforcement orders, and unavailability of transport to and from the airport. There is panic and uncertainty at the airport. People are momentarily asked to lie down as police go after suspected areas of danger.
Authorities said that there was only one scene of shooting at Terminal 2 and that there had been no confirmation of  any other shooting at Terminal 1.
NEWS AND FEATURES
News & Features Around The World