Mayor Bill de Blasio and Governor Andrew Cuomo
A federal judge in New York on Friday described the decision of the trio of Governor Andrew Cuomo, Mayor Bill de Blasio and State Attorney General Letita James, in limiting Church worship services and allowing protests as a trend in absolute monarchy.
Judge L. Gary made the statement during a preliminary injunction in a case brought against New York State on behalf of two Catholic priests and a trio of Jewish orthodox congregants in Brooklyn, according to a news report by Fox News.
It can be recalled that churches in the United States have cried out loud how they have been affected by the lockdown from Covid-19 regulations and protesters are allowed a free reign, not only to populate the streets in large numbers but also looted and destroyed properties without restraint.
It can also be remembered how Mayor de Blasio conflicted with Jewish mourners over a funeral procession and the mayor threatened fire and brimstone against the mourners 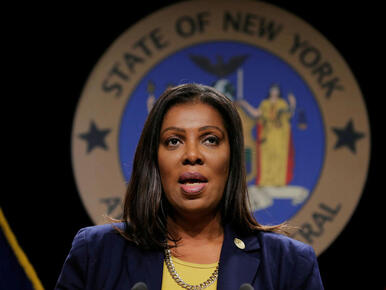 State Attorney General Letita James
Curious observers have described government officials' roles in the Covid-19 crisis to playing God and lacking the knowledge of allowing people to exercise their rights to freedom of worship. Observers believe and say that these government officials elected by the people have forgotten about their mandate to protect the interest of the people and the only thing they remember in time of crisis is themselves and the advancement and protection of their political interests.
The decision to allow protesters is seen by many observers as advancement of the trio's party's plan against the man they do not want in the White House.They are careless of the repercussion of the protests so long it does not remove them from office, and it bleeds the country against the interests of their political opponents.
Judge Gary is not the first person to raise the likelihood of Governor Cuomo and Mayor de Blasio tending towards absolute monarchy. Many ordinary people have said the same, describing Cuomo and de Balsio exercising power (even against themselves) because of their political disagreement , despite belonging to the same party. They both apply the Constitution when it is in their favor, but the Constitution but their own morals will apply when it goes the other way.
HTML Comment Box is loading comments...
NEWS AND FEATURES
News & Features Around The World