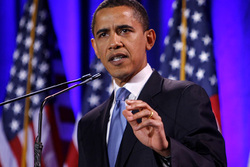 President Barack Obama
If affordable care is alive and well in Europe and Canada, its condition in America is still uncertain. It sure has serious birth defects based on press reports. It seems like every effort to make it cry like a normal baby by the Barack Obama administration has resulted in apologies. It is like the baby wants to be like a child Yoruba people of Nigeria commonly called ‘Abiku,’ a child who does not want to live.
Kathleen Sebelius, the country’s health secretary has offered countless apologies over computer glitches that have made registration for the care almost an impossible task. And just yesterday, President Barack Obama gave another apology to Americans who have been disenfranchised from their original health care against his promise during the electioneering campaign that those who already have health care and will like to keep it can do so without additional cost. Some people who already have health care are not only losing their health care, but are being made to embrace the new program at a head shaving cost.
"We didn't do a good enough job in terms of how we crafted the law," the president said in an interview with NBC News on Thursday. Reports show that even the Democratic Party senators are worried and scared about the defects of the affordable care here.
People are saying that the president’s apology brings to the fore numerous complaints that people have been making over the affordable care, raises a question about why a policy that is not properly packaged and malfunctioning against all entreaties should be forced on people.
Some people are saying that it is human to err and it is divine to forgive. However, the current problem with the affordable care is not about erring and forgiving but more about a political promise its fulfillment has turned into contradiction and a burden.
The president's opponent in the Congress and the streets have seized the opportunity of the seemingly unworkability of the program still at its gestating staging to condemn what they call a political program lacking in sincerity. The mood on the street sure will be reaching the White House and cannot escape the president's attention. The result is a report in the New York Times that says the president is angry and he has put the workers on the West Wing are under pressure.
Like everything in Washington that is turn into politics, some bloggers who are inclined to support the federal government are accusing the Republicans in the Congress of using the affordable care's defects to condemn the program instead of using the constituent services to help people in their constituents having problem with the affordable care and itself an admission of a problem they don't want to face its reality.
As it can easily be admitted by strategic communication practitioners, continued silence by the administration would have been more damaging to its image. The president's admission and apology may have helped stem the level of criticism. But people are saying that the most important thing is for the administration to quickly resolve the defects with the affordable care; ensure all the burden it is currently constituting to Americans irrespective of party leaning are addressed to ensure that the president's earlier promise stands against any occurrence that will give the president the garb of politicians who don't fulfill their promises and which his supporters don't want him to be associated.