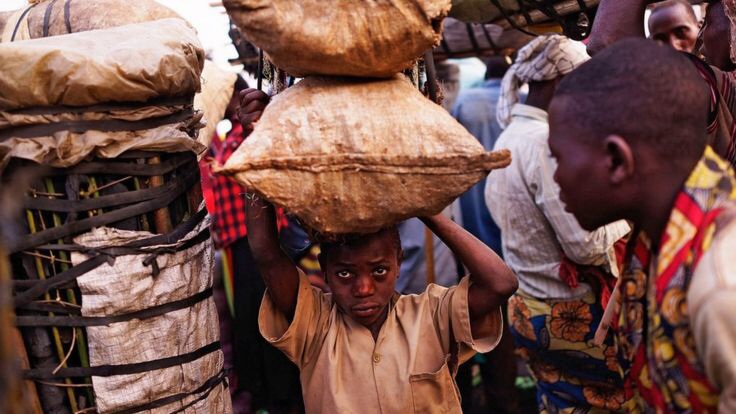 The type of burden poverty causes(Courtesy:BBC)
Africa has been highlighted as the base of world's extreme poverty, in a release by the World Bank and published by the BBC on Monday. The World Bank said in the report that it expects Africa to soon account for those living in extreme poverty, of the less than 10% of the world's population, which will be living in extreme poverty by the end of 2015.
The World Bank noted that reduction in the number of people living in extreme caused by increased investment in education, health and safety net, and that it views the growing concentration of poverty in the sub Saharan Africa with great concern.   However, the bank says that reducing poverty in the East Asia and the Pacific region as key to global progress. How did the bank arrived at its summation? The bank said it was using a new income figure of $1.90 per day to define extreme poverty, up from $1.25.
Although extreme poverty in sun Saharan region gives the bank a cause for concern, it also say that extreme poverty in that region is seen as falling from 46.2% in 2012 to 35.2% at the end of 2015.
"But sub-Saharan Africa is projected to have about half the world's extreme poor by then, and the report's authors say they are concerned that poverty is falling too slowly there," the report published by the BBC noted.
South Asia was also flagged as an area where extreme poverty was concentrated, despite major gains in reducing poverty. Overall, poverty is still worldwide. Though it is more in some areas than in some other areas.
Lack of transparency, accountability  and corruption on the part of leaders in sub Saharan Africa is mostly said to cause the wealth of the people not reaching the people in the bottom of the ladder. The rich gets richer and the poor gets poorer. it is becoming a curse to be seen to be poor among the populACE, and the rush on the part of everyone to have a share of the cake has exacerbated the level of corruption among government officials and the business environment.
The worldwide refugee scenario is partly due to poverty by people who are running away from less advantaged countries to countries, where they think their economic condition would be better off than where they have been impoverished by poverty.
NEWS AND FEATURES
News & Features Around The World