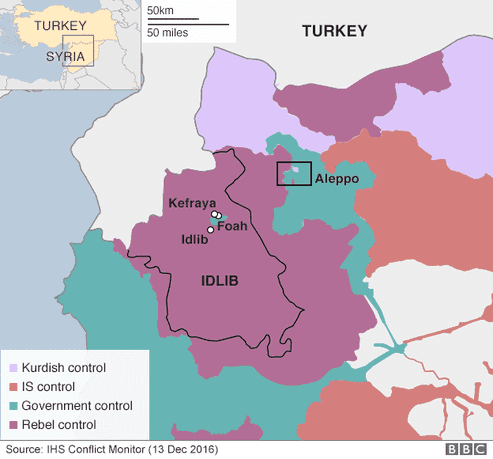 The map of Aleppo showing how fragmented the city has been divided between the Syrian government, the rebels and the IS
Today, the world learned about efforts to evacuate hapless civilians from the path of trouble in Aleppo as underway, and that evacuation began Thursday morning!
The question that follows or comes up as you read the news is why beginnng the evacuation on Thursday and why not earlier?
Why waited until after the gun fire and the bombs had taken away presious lives needed to be saved? Many observers are saying that this is certainly not how to save lives.
The world woke up to a ghastly development in Aleppo, Syria, three days ago, when news emerged about fightng there and an attempt by the Syrain government to clear the rebels off the area. Information is all over the world about how civilians, including children, have been caught in the cross fire and the rain of bombs.
In the middle of the news about the civilians caught in the danger of losing their lives, another information emerged of efforts to evacuate civilians from the besieged city and how the efforets fell apart and gunfires and bombs rained on the city.
Global Pentorch asked a question about what many of civilans in the city waited for from fleeing the city, especially from the east of the city, when the Syrian government had announced to the rebels to abandon their positions in the city, days before the attack, for them to avoid imminent death.
"A war previously announced, does not kill the lame," is a popular adage in Yorubaland of Nigeria..This is because of the belief that once a war has been announced as on its way, the lame of all people is expected to be able to run to safety before the arrival of combatants in a war
War is not a party or picknic that anyone would wait and see to admire or partake. unless to the destruction of those careless with the protection over their lives.
For example, Milad El-Shahabi, is a film maker in Syria and caught in the cross fire in Aleppo. He said in a news reports in the BBC that the world may be hearing the last from him! Is that his choice? Why cannt he run to safety? Doesn't he think the world will benefit for him to remain alive than die in a war and his filming expertise lost forever?
When the current map of Aleppo is studied and the areas controlled by the Syrian government, the rebels, and the the ISIS, what is manifest is fragmenttion of trouble.  No wherree for any sane person, who is serious to be alive should be, as a reminder of all the dangers associated with wars as avenues for carnages beyong human control.
The rebels are saying that evacuation is underway. The United Nations cries out againstthe danger to civilians lives. And some civilians have said that they are ready to die to defend the city against the Syrian government. And the Syrain government is saying that it is doing everuthing possible to get civilians out of harms' way.
And yet, no evacuation of civilians has taken place, three days into the fears, about civilians death in the city. All that the world is hearing is about evacuation that is underway.