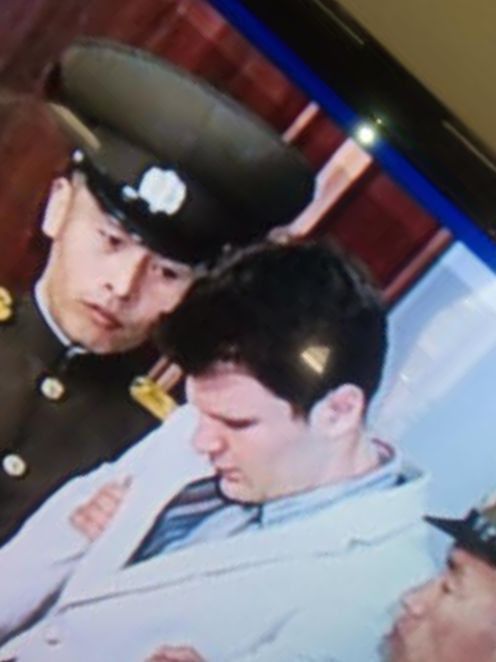 Otto Warmbier in the hands of his captors before his flight home
It is not in all cases that people have been reported as going into the Lions' den and coming out alive. It is what has made the Bible story about royal master Darius sentencing of Daniel very interesting one, unmatched by any other story of survival.
It is rare for anyone to go into the Lions' den and come out alive. But these three men went into the Lions' den and came out alive! There have been stories of zoo keepers, who have tried to be like Daniel, but they hardly return alive.
Since Wednesday, the world has been greeted by the story of a young American University student, who arrives alive from the Lions' den. He is Otto Warmbier, and the American media has been agog about his arrival, but Warmbier story isn't without signs of having been in what is veritable equivalent of Lions' den.
Warmbier is reported as having severe neurological disorder. Before the doctor's report on Warmbier's state of health late on Thursday after his arrival from North Korea, where he has spent about 17 months in jail, his father has spoken to the media about his son's happy return home. But he said something about North Korea, and what he said had been confirmed by knowledgeable people about North Korea.
Fred Warmbier said the North Korea is brutal and terroristic. He believes that his Ottowarm bier has fought to stay alive. The doctor's report has confirmed Fred's statement, because Otto has yet to remember his surrounding or understand the language people speak around him. People ask ow then has the father been able to talk to him or he to his father?
But people are asking how Wambier got into North Korea that suddenly Lions' den for him. Wambier's father has answered the question. He said his son went to North Korea as a tourist like other students. He said North Koreans arrested and was taken hostage him at the airport, while he was on his way to board the aircraft, on his way out of the country. He said he was taken to trial accused of war crime! And sounded like he said that his son and other  students were deceived into going to North Korea.
It is characteristic of life in Lion's den, where people are known to go but hardly come out alive. When one is accused of a war crime in a time of peace, the journey is toward liquidation and justification for such liquidation. When your enemy wants to get you, the natural accusation is to hand accusation of crime against the state over your neck.
Warmbier has escaped from the Lions' den and his freedom is a cause for celebration. But he still needs prayers to regain his positive neurological  condition. As tourists, we all must have learned a lesson that North Korea is not a place people should go as tourists, being a Lions' den camouflaging as humans' habitation. ​
​    And tourists companies seeking gains from the proceeds of money from people going there as tourists will never say the truth. They will deceive innocent people to go into that danger and they will clam up to enjoy their ill gotten wealth
NEWS AND FEATURES
News & Features Around The World