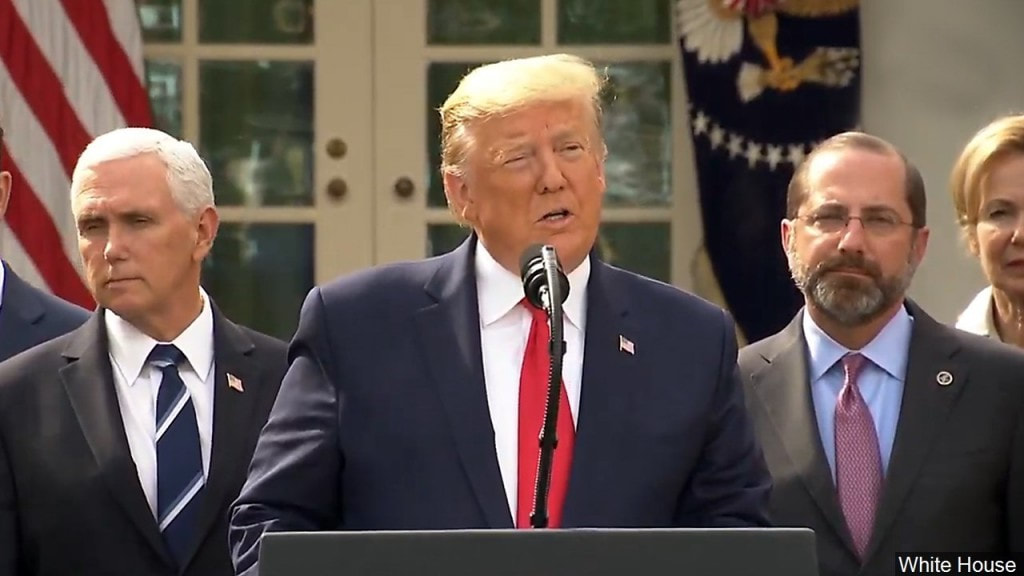 President Donald Trump signed the America's 2020 $2 Trillion Relief bill into law on Friday amid appreciation of the president's hard work by top members of the Republican Party and members of the Coronavirus Committee. The bipartisan bill will ensure assistance to Americans, big and small businesses and for hospitals around the country to beef up capacity in the fight against the deadly Coronavirus.
Why were the Democratic Party leaders not at the signing ceremony at the White House by the president? The question was asked by the CNN in its report of the signing ceremony. The station's presenter asked whether the Democrats were invited. The station's White House correspondent made a reference to recent cold relationship between the party and the White House.
As the CNN report continued, The Michigan governor, Gretchen Whitmer, was interviewed about the effect of Coronavirus on Michigan and whether she thought General Motors could meet the demand on president's request for ventilators. The governor expressed optimism on General Motors record as a company to trust. However, she said she will not fight for anybody other than the Michigans.
Of course, no one would expect any governor to go beyond his or her territory to fight for the defense of the right of anyone. Just as the Chicago's Mayor Lori Lightfoot, expressed her concern in an MSNBC interview  over the effect of the Coronavirus on the people of Chicago. Just like the New York Mayor De Blasio too has been making efforts to save New Yorkers. There is no other governor that has shown how to fight for their own people more than Andrew Cuomo of New York. And in the same vein, the world has witnessed Trump's fight to ensure Americans are not left without needed assistance, because he has responsibility over all Americans. In the next few weeks, America will begin to feel the impact of the $2T relief bill. Now, consider that this bill is not in place and all the governors and mayors are crying for attention.
The wonder in the fastness of the proactive method that ensured the discussion and action that gave birth and life to that relief bill is the bipartisanship behind the bill, despite the cold relationship between the White House and the Democratic Party controlled House. It is one truth that must not be grossed over that the president bent backward against an existing cold relationship to embrace hitherto political enemies to save the ship of the state and his own presidency. .
The White House did not need to invite Nancy Pelosi and the House leaders to the signing ceremony. Since the bill moved from the House to the White House after it was passed, the House leaders were supposed to have followed the bill straight to the White House to join the ceremony to show good faith, unless protocol demanded otherwise. The Democrats had an opportunity to bring the country together but they missed it. Of course, the ceremony, and any ceremony for that matter is irrelevant at this time that everyone is on the run from untimely death.
The ceremony was brief. At least, the president thanked both the Republicans and the Democrats for making the event possible. However, if the Democrats had attended, Americans would have been assured more than they may have that their leaders would unite continuously to continue shaming Coronavirus and that Americans' comfort would not be left at anytime to suffer at the altar of partisan politics.
This is America's 2020 $2 Trillion  Relief Bill against Corvid-19 and not Corvit-19 Relief bill. I disagree to call it Corvid-19 relief bill. Coronavirus must not be given too much room.
Comment Box is loading comments...
NEWS AND FEATURES
News & Features Around The World