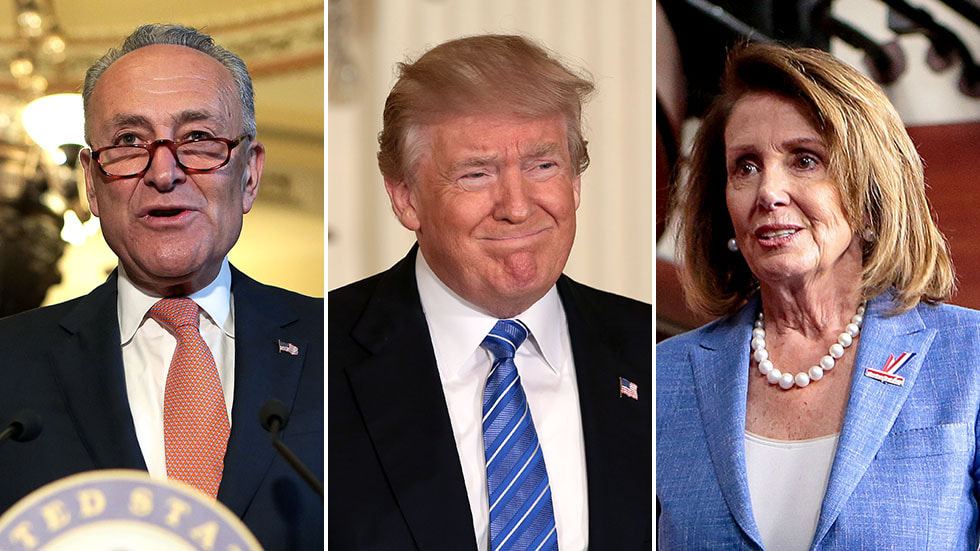 Charles Schumer, Democratic Senate minority leader, President Donald Trump and Nancy Pelosi
Nancy Pelosi emerged the new speaker of the House of Representatives on Thursday and in a bombshell described President Donald Trump's wall as immoral. It renewed the rigid position of the Democratic Party against President Trump's plan for a wall as part of the country's border security.
Americans had expected a way forward in the impasse over the border wall and border security. The issue of insecurity at the border had continually made the need to secure the border a political campaign issue from time to time, and became a major campaign promise by the incumbent president to build a wall breaking with the past about border security measures that never secured the border.
The idea about building a wall made President Donald Trump a different candidate among other Republican Party candidates during the 2016 political debates. He floated the wall idea. He was stoutly opposed by his opponents. But he stuck to the wall idea, despite the jests they made of his wall idea by his opponents and he defeated them all. Today, he is still fighting to actualize the wall idea amid a fight by Democratic Party's stout opposition to kill the idea.
The Democratic big wigs have been talking about continued border protection without a wall as the own idea, an idea that has become so old that Americans know it no longer serve the purpose of a durable security at the borders, making the issue of border security and illegal immigration the-twin hottest issue facing the American government, and  an issue that has once more brought the idea of shaking up the status quo to the table.
Trump's journey from the campaign stable to the White house and embarking on some ideas that are unwelcome by old power players and many of their supporters shows how difficult efforts at changing the status quo can be. Old power players prefer to do things the way they are known to do them. They are against a durable wall at the border in favor of maintenance of the status quo. Making what should be a policy issue a political issue.
The idea of building a wall has become a political matter against Andy Biggs of Arizona's statement that this is an essential policy issue and not a political issue, because the Congress is required to fund the security at the borders, and that requires their support for the president's initiative.
The statement from Eric Swalwell of California that the wall cannot be built is about clinging to the maintenance of status quo and purely political. Swalwell and others like him have no reason for opposing the wall other than that it is the Trump's idea. Today we hear Democrats and their supporters saying their tax money is not meant to build a wall, forgetting that Republicans as well do pay tax and they want the wall.
President Trump has expressed willingness to make a deal with the Democrats, but the Democrats are talking about who is responsible for shutting the government. Pelosi spoke about giving the president a pathway of reopening the government by a Republican Party earlier initiative.
But McConnell, the senate leader has said the senate would not consider working on any bill that the president would not sign. So, the new House is expected to pass a bill meriting the senate and the president's consideration. Many people think that the opposition that Trump is facing from the dislike of his person by the Democrats of the liberals. The Democrats and the liberals are not just attuned to defeat and new ideas. They hate a change in the status quo and if you want to change the status quo like Trump is doing, be ready for the worst. Period.
Many Americans expected that as Pelosi assumed the leadership of the House on Thursday, she would  allow reason to prevail and that she would work to convince her counterparts in the Democratic Party to disembark from the maintenance of the status quo regarding border security, vote for the wall and move the country forward. But the rigid stance of "No Wall" came as a shock to many Americans workers affected by the partial government shutdown.