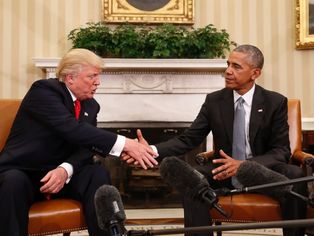 President Barack Obama and the new president elect, Donald Trump at the Oval Office on Thursday.
There have been protests in major cities in the United States against the presidential election results and the emergence of Donald Trump as president, news reports say. The protests have notably been happening in California, Oregon, New York and Minnesota.
The reason for the protests is not about questions on the fairness of the election or otherwise, though some people are linking the protests to the differences in the popular votes and the electoral votes won by Hillary Clinton and Donald Trump. Clinton won the popular votes and Trump won the electoral votes.
Available information shows that it is how the electoral system in the US works. The winner of the election is always the winner of the highest electoral votes and not the popular votes. it happened between Al Gore and George Bush in 2001.It is the law. Of course in 2001, there were controversies over the Florida election results, unlike in 2016.
Why are then the protests? Because a major presidential candidate lost an election? Certainly not. Based on what people are saying, it may be as a result of the propaganda that Trump's presidency may bring the world's economy into ruin, lead the world into destruction and that as a non-career politician, he lacks the knowledge to manage or run a country and that only their candidate has the knowledge to manage the country.
The last option represents a partisan opinion and it is no reason to go on the streets for demonstration. The only reason that public demonstration and rejection of the election results can be  justifiable is the availability of a proof of election malpractices. The election results show that Mrs. Clinton not only lost the election, but that the hope of the Democratic Party to win majority in the Congress also failed, representing an entire repudiation of the Democratic Party agenda, and that voters' approved the view that the country has been traveling on a wrong direction.
Some observers see the protest as a necessity in a climate of change, especially a change some of us find difficult to accept as coming against their comfortable position and that the maintenance of the status quo lost the battle. Americans voted for change and there bounds to be a show of dissatisfaction as usually the case at the beginning of every difficult and unexpected change like when a woman is delivering a new child, according to the words of Dick Gregory in "The Shadow that Scares Me".
Amid these developments, some observers are quick to say off record that the protests against Trump should not be traced to  Clinton supporters' anger alone. They reminded people of the mammoth opposition to Trump from the Republican Party and that some of the Republican party bigwigs vowed they would not live to see Trump elected. But now that Trump has triumphed, some of these Republicans have been silent, while others have congratulated the president elect. What about the useless vows some of them made to their supporters against Trump? How is the public certain that some of these protests are not being sponsored by millionaires from both parties watching from the sidelines?
Meanwhile, President Barack Obama and the president elect had their first official meeting on Thursday at the Oval Office in Washington. Trump also met with Republican Party members of the Congress. The Democratic Party has suffered a great loss and some members of the party are already considering what to do to bring the party back to reckoning. Many Americans are anticipating what gains would accrue to them from the political change in the country, especially with the percentage workers pay as tax
​   What would happen to Obama's legacy that he campaigned hard along with Clinton to protect? Would he get helping hands from the president elect against the Republican Party controlled Congress, when the battle against Obamacare begins? What about Trump's promise to cancel Obamacare? Clinton has said she is ready to work with Trump! Smart move. Could there be a meeting ground by all these power players in the interest of the country?
And what would happen to the Clintons and the investigation into the family's foundation? So many difficult questions begging to be answered that make the picture scary.