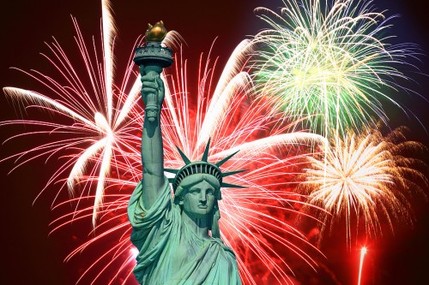 Lady Liberty, a gift from the French people to America at independence
The weather had been extremely hot for three consecutive days in New York City, but on Thursday evening - prior to America's Independence Day anniversary - a little rainfall enveloped the atmosphere. And the weather began a journey toward coolness through the night.
Again on Friday morning, a short time of rain preceded the day and throughout the day a lovely coolness enveloped the atmosphere. It was America's Independence Day and the manifestation of the grace of God.
In the afternoon, the coolness and the continued dropping of rain - not enormous - almost displaced the idea of people going out to barbecue, beach and partying. But towards evening the weather improved for celebrations and anticipated fireworks characteristic of the anniversary since over 200 years ago.
America gained independence from Britain after a hard fought war of independence. " We hold these truths to be set-evident, that all men are created equal, that they are endowed by their Creator with certain unalienable Rights, that among these are Life, Liberty and the pursuit of Happiness...That to secure these rights, Governments are instituted among Men, deriving their just powers from the consent of the governed." This statement is the second paragraph of America's Declaration of Independence of July 4, 1776, the foundation on which America was founded and it is what is remembered every 4th of July.
The first paragraph of the declaration speaks about human events, laws of nature and nature's God entitlement, powers of the earth and mankind. No other thing could have announced to an unwary soul on Friday that it was America's Independence Day than near empty train cars early in the morning, which on a regular working day is always filled to the brim.
Americans were home observing independence anniversary holiday. This reporter counted only five people in the car of a train he traveled from Downtown Manhattan to Brooklyn. And by evening time, the sky was filled with fire works announcing to the world the remembrance of the day that America threw away the yoke of bondage and embraced freedom, turning the territory into the land of the free and home of the brave.
By evening time, the streets have become near congested. Traveling from Brooklyn back to Manhattan first seemed like a regular holiday crowd on the train. When the train stopped at the Borough Hall Station, the crowd under that emerged from street under the direction of police officers held the train for minutes and the surge continued until there was no more space in the cars. The surge was more at the Wall Street, Fulton Street and Park Place Stations.
Walking up staircase at Park Place, an encounter with a surging crowd elicits a question about where were all these people in the morning. The answer was of course apparent: People will be on their bed early on holiday. And on a fine weather day that nature allows, it is natural for people to develop freedom with their feet, enjoy a good weather and celebrate the freedom that only God has given and no man can take away, like the weather that humans have no power to control.
Some people describe the independence day weather in New York City as rainy; others say it is no rain but a shower of blessing, because people go out without umbrella. Though, the weather was cool and the sky cloudy, like a heavy rain will burst forth all day.
On Saturday, people say the weather yesterday has a sprinkle of rain, but the weather on the day after independence is chilly early in the morning and will be gorgeous later in the day.
HTML Comment Box is loading comments...
NEWS AND FEATURES
News & Features Around The World