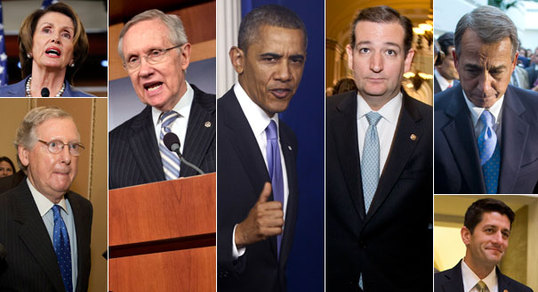 Pelosi,McConnell,Reid,Obama, Cruz, Boehner and Ryan (Courtesy: image.politico.com)
Politicians in Washington DC have just emerged from a rancorous haggling over the debacle of default if the country fails to raise its debt ceiling. The resultant closure of government’ business for two weeks and its effects would not be easily forgotten. One noticeable development was that while the argument over the spending bill lasted, the world caught cold about what would happen to the world’s economy in the case of an American default.
From London to Frankfurt to Paris and Beijing, people pleaded to the U.S, urging the country to take care of its business to save the world’s economy from danger.
President Barack Obama on his part spoke ceaselessly for the debt ceiling to be raised to avoid unpleasant default and the likely consequences to the world as a whole. Republican Party politicians who had asked for discussions over Obamacare before they could discuss possibility of raising the debt ceiling were confronted with an evil they were bringing the country if the debt ceiling was not raised and the country defaults on its financial obligations.
At a news conference reported by the CNN, President Obama said that Republicans could essentially set the agenda for budget negotiations, but only if Congress agrees first to a short-term spending plan to fund the government and to raise the federal borrowing limit to avoid a possible first-ever U.S. default next week. Unless this was done and without defunding Obama, he could not negotiate with the House Republicans.
The president's demand show how vulnerable the country is managed without debt and it means that America’s fiscal situation is such that without borrowing it cannot meet its obligation to its creditors. People are asking questions about how many times the country will be raising its debt ceiling for it to be able pay its creditors. This has made the Republican Party’s position to resonate with the public. Curious members of the public think that any human person or entity that relies on continuous borrowing to meet its financial obligations cannot be regarded as frugal or wealthy.
Theresa Blumenthal, a social worker in Manhattan believes one has to manage his or her finance in this Kingdom of Money, and whatever happens in the Kingdom of Heaven will be there, and not here.
The argument over debt reduction, raising the debt ceiling and sorts of gobbledygook have become like a recurring decimal in the nation’s politics. The need for debt reduction has been politicized that members of the public are confused and divided over the rationale and the need for the country to reduce and manage its debt. And rather than for the politicians to view the position of the country’s fiscal situation with required seriousness, liberals think the country has to continuing borrowing to fund its programs, and whatever the conservatives are saying is dressed by their opponents as an effort to win elections and the truth of it glossed over. Democrats say the Republican president, George Bush, squandered the wealth President Bill Clinton left in the coffer. But pragmatists ask if this is a justification to borrow without limitation.
“There is one thing politicians worldwide know how to do that they care about: to win elections. They don’t care about what happens when they are no longer there.”  Edwin Murphy, a security specialist said. “If they care about the future of this country, they will be discussing seriously about what endless debt constitutes and what its management will entail for the children in future, when they are no longer here.” He says the government implores him to manage his finance and he does, but wonders why the government cannot manage its own finance.
Apparently, what would have happened with America defaulting on its debt obligation was that its credit rating would have been impacted; the country would have been unable to borrow, just like many people with bad credits in the civilized world cannot borrow to finance the purchase of home or car. To avoid the unpleasantness, people are urged to manage their finance. Therefore, managing one’s finance is viewed as a high sense of responsibility and inability as a sense of irresponsibility. The same is applicable to nation states.
A whole lot of possible scenarios were bandied around in the two weeks that government’s business was shuttered in America about what would have happened had American default its debt obligations. Some people say China that holds much of the American debt would have taken over the U.S. Others say that China don’t have the military might to confront and take over America in that manner. All it would have done was ask for payment rescheduling with no more credit line.